This is the last individual round of the day, which is 90 minute round. The round is based around binary determination. A cell is either coloured or empty, a cell is either black or white. There's a few common puzzle types, a few new ideas and a few small variants on common puzzle types. I'm not really sure how this round will go for me as there are many types where the contrustion of the puzzle can really make a difference.
I prepared 3 new types and 2 more common types as practise puzzles. The White Pentamino puzzle is nothing spectacular but I think it's a fun solve. The no mirroring rule is not technically necessary for my puzzle. It still has the standard somewhat innate difficulty pentomino puzzles generally have. The Paint-by variants worked out really nicely in my opinion. It helped me a lot in seeing how these types work. The Tapa and Corral aren't anything spectacular. They were being very stubborn in construction and in the end I decided to just go for something simple.
Hope they are enjoyable.

Puzzles can befound below.

Rules:
Colour some squares black. Numbers on the outside indicate the sequences of connected black squares in that row or column; the numbers are not necessarily in order. The remaining white cells form the twelve given pentominoes. Pentominoes can't touch eachother, not even diagonally. The pentominoes can be rotated, but not mirrored.

Rules:
Paint some cells black to form a single contiguous wall, which doesn't touch itself diagonally anywhere. Nowhere can an area of 2x2 cells be completely coloured. Numbers on the outside indicate the sequences of connected cells in every row and column; the numbers aren't necessarily in order. Different sequences are seperated by at least one empty square. 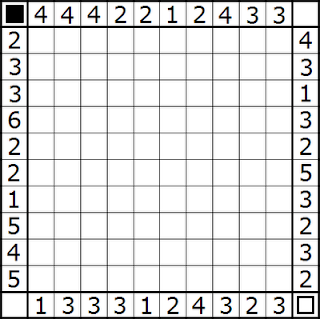 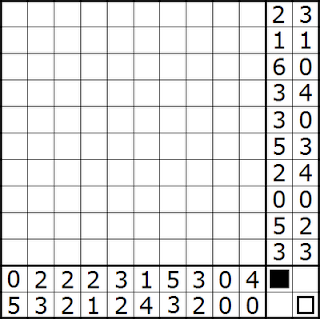 Rules:
Paint some cells black to form a single contiguous wall. This wall can't have any 2x2 coloured areas anywhere in the grid. Numbers in the grid indicate the sequences of coloured cells in the 8 cells around it. If there are multiple numbers in the grid, the sequences of connected cells are seperated by at least one empty cell. Cells with numbers can't be coloured. If there is a question mark in a cell, it has to be replaced by an even number. 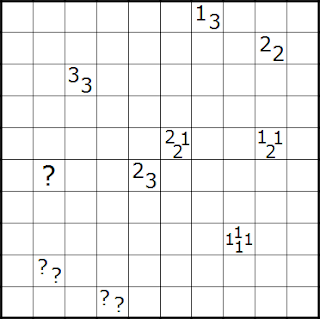