These are the last 2 practice puzzles for the WSC. I'll be focussing on the WPC a bit for the next week. That's the championship where I'm actually competitive. I don't know whether I'll be posting puzzles yet for the WPC, but they might show up.
Nine posts also seems the appropriate number for a Sudoku competition. This time they are two practice puzzles for the instructionless round.
If someone has any specific request for a puzzle type, I might be persuaded to make another. Let me know.

I figured this is a round that might need some practice too. I don't think for either puzzle the rules are too hard to figure out. It's possible that both ideas have been done before. I can't remember seeing them before, but my memory isn't perfect. They're not exactly innovative ideas.
I think the first puzzle is probably more like a puzzle in the actual test. It's a just simple addition to a Sudoku grid. I had fun writing them, but with a bit more time I could have made them a bit nicer.
The second puzzle I'm not sure whether it qualifies as a Sudoku puzzle. It has all the rules of a normal Sudoku puzzle but it doesn't uses numbers like most Sudoku puzzles. I think the rules are pretty simple. I had a lot of fun writing them, so they should be fun to solve, I think.
Try the examples too. They're both fun puzzles too.

Rules Puzzle #1 (highlight if needed): Each marked 2-cell area contains a 2-digit number, read left to right or top to bottom. The first marked 2-cell area seen by an arrow must contain a larger 2-digit number than the arrow.
Rules Puzzle #2 (highlight if needed): Place 8 arrows (fghimlkj) once in every row, column and marked 3x3 area. Numbers in the grid indicate how many arrows are pointing at that cell. 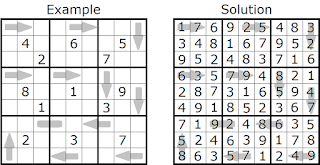 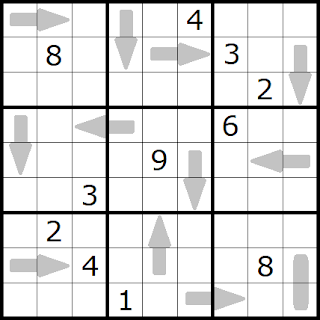 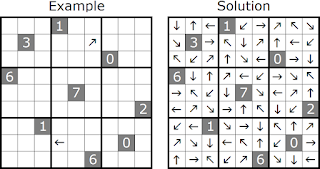 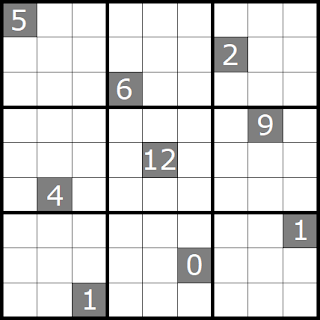