This puzzle was written as a birthday present to Zuzana Hromcova. Matus Demiger contacted numerous authors to make a puzzle for her birthday to create a set of 18 puzzles for her 18th birthday. This is my puzzle. It's a standard Fillomino. I think the theming should be clear to everyone. The red numbers have no special meaning for the solve, but you can probably figure out why they are red. I really like how the solve turned out. I hope Zuzana enjoyed it.

Another week, another Sudoku. This week a small twist on the Clone Sudoku genre. Normally the Clone Sudoku has the same digits in the same places for equal shapes. For this one the digits are consecutive in the same places instead. I think it makes the solve a bit trickier than normal. It definitely made the construction a bit more confusing. It took me a few tries to get a puzzles out with valid solutions, after which a few of those ended up not being unique because I had eliminated digits I shouldn't have.
I find designing Sudokus like these harder in general. I'm usually better with a more influential rule, which I can then exploit. That's why I generally prefer designing Sudokus that require no or only little givens in the grid. That's why in these types of Sudokus, I usually give it many tries, till I get a puzzle I'm happy with. I tend to be a bit picky about my puzzles and often rewrite and edit already nice puzzles, because a part of it doesn't come out the way I had planned to. So I change them to highlight it. In this one I had started with two extra cloned shapes, but then I thought it would be nicer to just have the same shapes for givens as Cloned areas. The second try ended up with one extra digit in the center. I liked it and it solved nicely. But still I really wanted that middle digit gone too, so I gave it another go. And eventually this was the result. This solves nicely and is in my opinion the nicest of the three. It shouldn't be too hard, but of course there's always the challenge of adapting to a new rule set. My Quad Second Sudoku had some people struggling to overcome not solving it as a Quad Max, so here people might get stuck looking at it as a regular Clone Sudoku. So try not to do that. Enjoy.

For anyone interested, you are still free to join the Daily League Group or you can request access to the Google Spreadsheet from Rishi Puri. You can also solve all puzzles the day after at SudokuCup.

In this Sudoku, digits in the same place in both grey figures have to be consecutive. 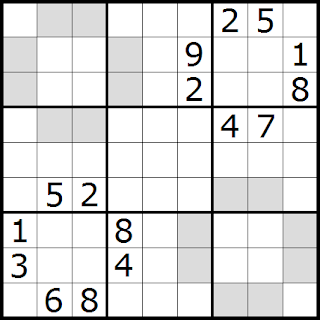 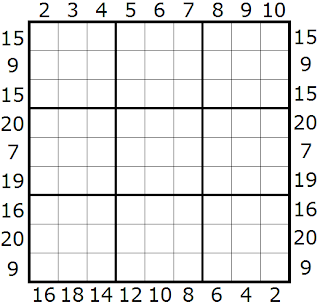 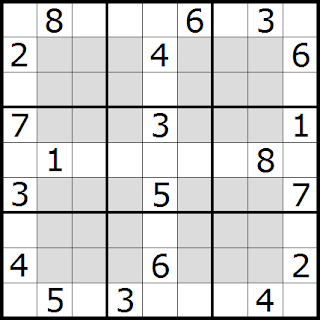