Last weekend was the Japanese NumberPlace Championship. It was full of great puzzles, but my favourite was the Hit NumberPlace by Naoki Inaba. I didn't manage to solve it during the championship as I didn't find the logic. But once I found the logic afterwards I really enjoyed it. That's why I decided to write one of my own for the league.

During the solve I realised a bit of logic that I thought would be fun to use in one of these puzzles. I just had to find a nice solution grid in which I could easily implement this. I actually stole a solution grid from the JNPC, which I slightly altered as at one point during construction I ran into no solution. But I noticed that by switching a few numbers around it could still have a solution. The trick I used isn't overly hard but I think it might be wise to try to solve the original puzzle first so that you can understand the logic involved, because I think it is useful to understand the genre before attempting this puzzle. The hit NumberPlace is #19 in the set.

That said, the puzzle is completely logically solvable. I think it is nice but it a bit on the harder side. Still, I hope you'll enjoy it.

Numbers outside the original grid indicate how many digits are the same in the solution grid in the corresponding row or column. 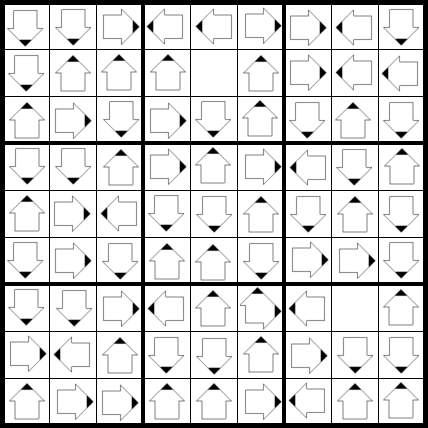