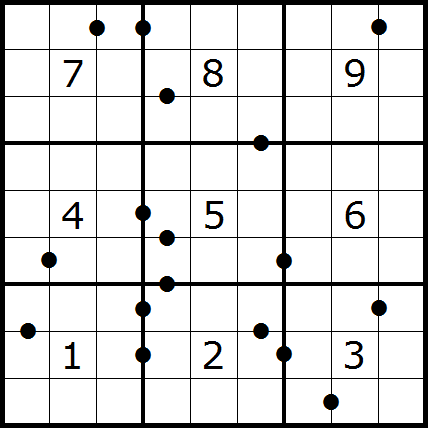 Last Tuesday was the Dutch Sudoku Championship. I won the Dutch Championship and can now call myself Dutch Sudoku Champion for a year. The puzzles can be found at http://wcpn.nl. All Sudokus were written by Richard Stolk. In case you need the English translations for the instructions, they can be found in this forum post. This Sudoku was one of the types appearing the championship. I thought this was most likely the least common type to appear in the test, so that's why I decided to write one myself.
I think this puzzle isn't too hard, but I will await the times to see if my judgement is accurate. They are more often not correct when it comes to Sudokus. You can solve the puzzle at SudokuCup, which features all Daily League Sudokus suitable for the applet on a one day delay.

In this Sudoku, the digits on the outside indicate which digits are directly adjacent to the digit 9 in that row or column. The digits are not necessarily listed in order.