I contributed a set for the Puzzle Championships for the individual round and wrote a team round together with Zoltan Horvath.

You can find all puzzles of the Championships in the following link: Sudoku Rounds + Team Round, Puzzle Rounds. My puzzle set is round 4. This post will feature all the puzzles from my individual round. Tomorrow I will post the Team round puzzles with a special surprise.

Last year's set was a bit on the difficult side, so I tried to think of a way to rectify that this year. I decided to write 2 puzzles per type, one smaller/easier one and a larger/harder one. I didn't want to make any too difficult. I selected 10 varying types of puzzles. I was hoping to average about 1.5 minutes per puzzle on the smaller ones and about 4.5 minutes per puzzle on the larger ones. I had the set tested by Prasanna Seshadri, James McGowan and Stefan Gaspar. The smaller puzzles made that average pretty well, but the larger puzzles were more inching towards 5-5.5 average and all of them had some outliers. I couldn't really decide well which puzzles to cut so I sent in the whole set and let them know that they could leave out a puzzle type if necessary. During their testing 3 of the larger puzzles seem to have cause some problems as they went up in score. I think the set will have worked well none-the-less for all solvers with the easier puzzles to work with as well, but I'd love to hear some feedback form those who were there.

Draw a single closed loop through the grid by connecting the centres of cells horizontally and vertically. Numbers on the outside indicate how many cells are used by the loop in that row or column.

This puzzle is a variant on Catwalk. In this puzzle type you draw a path from the given beginning and end point instead of a loop. 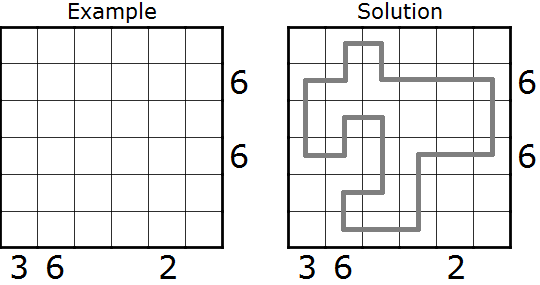 Divide the grid into some regions, formed by orthogonally adjacent squares. Each region should contain exactly two given numbers. The size of each region should be a value (in unit squares) strictly between the two numbers inside that region. Its size can't be equal to either of the numbers in the region. 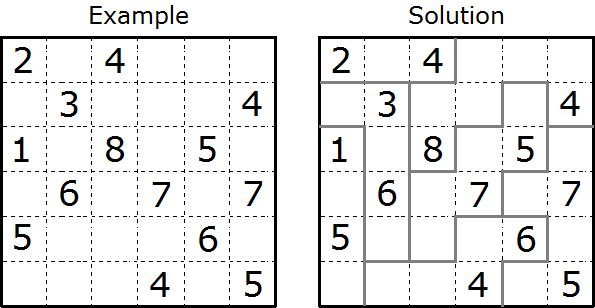