This is my second contribution to the Daily Sudoku League. This week so far featured a Killer Sudoku by Fred, a Queen Sudoku by Prasanna, a Diagonal Sudoku by Bastien, a Non-Consecutive Jigsaw Sudoku by Rishi and a Jigsaw Sudoku by Tom.
My puzzle will be a No Ten Sudoku. It is similar to Non-Consecutive and XV Sudoku, where no two neighbouring cells add to 10. It's a bit of a troubling type to design by hand as it's hard to judge in advance if you can still create a valid solution from this point on. This is also the reason it's almost impossible to design a Nonconsecutive Sudoku by hand. Usually they are designed with the help of a computer program, to make sure your currently set up Sudoku still has a valid solution. Too bad I didn't have a program to verify a solution for this variant. Although I usually design my puzzle progressively, I did create a valid solution first for this puzzle and then worked out how to turn that solution into a unique and logically solvable puzzle.

A little bit more on the league. We're using this Google Doc to keep track of the solving times. You can request access to it, even if you're not on facebook. You can add your name to the excel sheet and post your own times here for each puzzle. You can still add your times till a week after the end of a week to be considered for the Hall of Fame.
At the end of a puzzle week, Tom will create a Pdf with all puzzles of the week. This Pdf will contain the puzzles,  the best solving time and an estimated time for intermediate and novice solvers. The Pdf of Week 1 is available in the Facebook group or as a Google Doc. The Pdf for week 2 is currently only available in the facebook group.
In case you're interested in creating a puzzle for the Daily League, feel free to let us know in the facebook group. More constructors are always welcome.

In this Sudoku no two adjacent digits may add to 10.

This puzzle is part of the Daily Sudoku League. It's league for Sudoku solvers to test their skills against eachother on handmade Sudokus. It features puzzles by Rishi Puri, Tom Collyer, Fred Stalder, Prasanna Seshadri, Bastien Vial-Jaime and Seungjae Kwak. I will also be contributing puzzles to the league. Each day a Sudoku will be posted in the group and on the blogs of the respective author. At the end of the week a PDF will be released with all Sudokus of that week. The league is free to enter for anyone by joining the facebook group. So if you feel like testing your solving skills against others, please join.

For my first puzzle in the league, I have chosen a Distance Sudoku. It's a type I always like to solve. I have never made one before. I would rate it hard, as I would rate most my Sudoku variants. The little bit of aestetic in the puzzle can be found in the fact that the digits are built up of 4 sets of 1~9. I think it worked out well and gives for a challenging solve. I'm hoping it's not too hard for the general level aimed at for the Daily League, but I will find out after the first people have solved it. It should be fun to solve either way.

[Edit: I adjusted the image to conform with previous puzzles]

Outside each row and column the distance between two digits in that row or column is given. The order of the digits is top to bottom and left to right.

This puzzle has an opening that I like. It's probably been used before by others as it fits very well in a standard grid size. I tried to keep it symmetric, but after working through a big part of the puzzle it wouldn't get unique symmetrically without sacrificing some of the previous logic. As I liked everything I had put in till that point, I went looking for a fun way to finish it. I think I acchieved what I wanted in the end. Hope you enjoy it too.

Here's a 2013 inpired Turning Fences puzzle. You can find 2013 8 times in the grid. It's probably the easiest Turning Fences on this blog so far, so it's probably good practise for people new to this genre. When I had put all numbers in, it sadly turned out to have 8 solutions, but I really liked the way it looked. So I fixed it with a few crosses, just to make it unique. They don't change the solve in the slightest, so it seemed like an acceptable compromise. Enjoy.

The loop can't go through crosses. 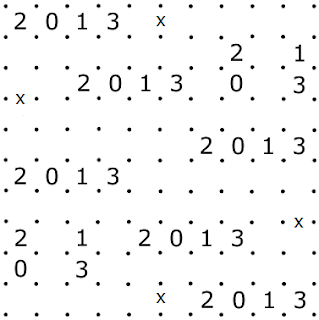 Again this is the last post in the countdown. So here's a future new year's wish for people on a later time zone.

As last year, 0 was a tough option to do something with. As I didn't want to have repeat genres, I didn't want to choose Heyawake, which I thought would be the easiest option. Eventually I tried Shakashaka, as a 0 actually gives a lot of information in this genre.
The puzzle is pretty easy, just like last year's Akari. It's a good way to lead in the New Year. 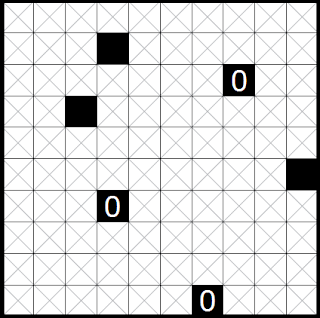