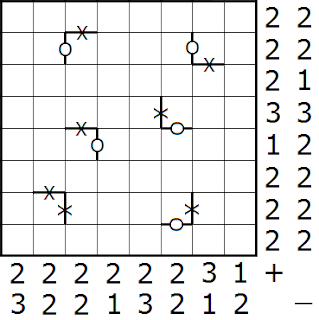 The grid is divided into domino regions. Place some magnets into these regions. Each magnet consists of a + pole and a - pole. Equal poles aren't allowed to touch by a side. The numbers on the outside indicate how many of each symbol are located in that row or column. 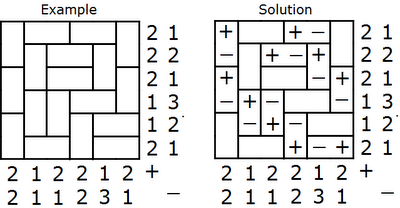 This is the first 12x12 Pentopia puzzle I've made that only has 10 clues. Most of my puzzles have 12 given clues. That just seems the total that's mostly needed to make the puzzle unique. Just like that most my 10x10 Yajilin puzzles use 10 clues. The opening to this puzzle is tricky, but after that it shouldn't cause too many problems.

There's been a few Masyu variants done with optional Black and White circles. Here's another one, with a extra twist. The twist is taken from the Castle Wall genre. I think the puzzle worked out nicely. The optional quality makes the puzzle a bit trickier. Maybe the next time I'd make the puzzle a bit bigger, to make the twist play out more.
I know I've been making more variants the last few weeks. That's why I've added an extra tag for all puzzle variants and hybrids to find them easier on the blog. I've left the variant tag off the Sudokus as every Sudoku is a Sudoku variant. If people think I should also add it to them, I will. 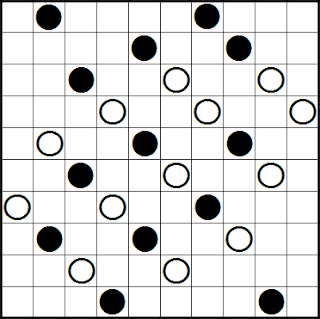 This genre was developed by Nikoli. 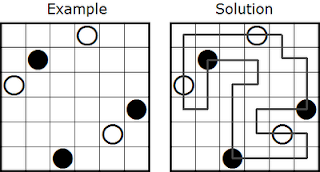 This a variant I thought of myself. I checked the TVC booklet and it didn't appear in it. So as far as I know it's original. It is a simple variant that I had attempted before. I couldn't make it work then. I think I wanted to make it too difficult then and couldn't get it to work. This one worked out. It's still tricky though. This one has all clues on a border between 2 cells. I do think it's just as easily possible to put the clues on nodes between four cells. I figured having to choose between 2 cells for the first one is difficult enough.

Use standard Tapa rules. Additionally, each Tapa clue is located on a border between multiple cells. This Tapa clue belongs in one of these cells. Determine which cell the clue belongs in and solve the puzzle. 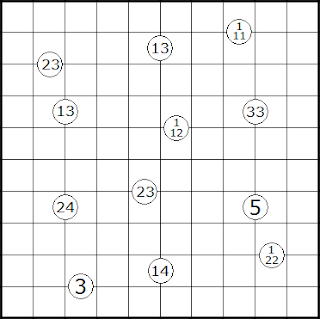 I've never really been a fan of Akari puzzles. The easy ones I find just go too quickly to really enjoy. The harder ones I feel like I'm just using trial and error. That's mostly why I haven't really made many of them. When I saw the regional variant on Naoki Inaba's site, I figured I'd give this a try in construction. I think it turned out okay. Nothing too difficult. 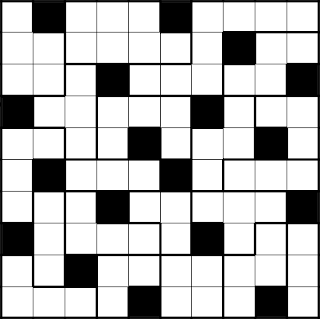 Place one lightbulb in each blackbordered region, so that every cell in the grid is illuminated by at least one lightbulb. Lightbulbs illuminate all cells they can see in a horizontal and vertical direction. Black cells block their sight. No two lightbulbs can illuminate eachother. 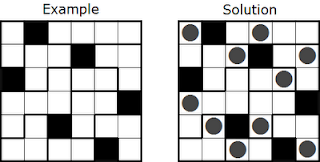 I guess this twin isn't very surprising. I did create the Liar Loop genre from the Maxi Loop genre. It has been the hardest one to acchieve so far though. I had attempted this a few times already, but it always lead nowhere. For this one I finally found a solid opening, that lead to good progress in both genres. Finishing it succesfully took some effort though. The puzzles both turned out well and I like the way clues keep helping in both genres. 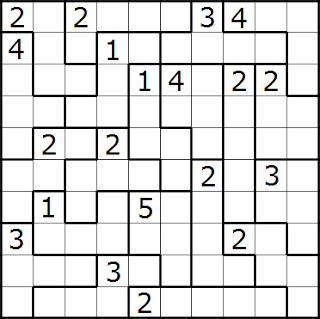 I liked the Crates variation when I first saw it on Palmer's blog. I didn't like the red numbers so much though. That's why I preferred the one puzzle without red numbers. Last year's USPC also featured a Corral Crates puzzle without red numbers. So my puzzle also doesn't contain any red numbers.
This puzzle originally didn't start out as a crates puzzle, except the five 17s and the antisymmetric pairs of 7's and 10's on the outside made a valid corral loop very difficutl to acchieve. I constantly ran into the problem of having no possible valid loop when designing. So I tried to switch to a Corral Crates design instead. It did make the opening a bit harder. I edited out a harder spot in the middle, but kept the opening in as I had already found it a nice way to make the five 17s work in earlier design attempts.

I encountered this puzzle type the first time when test solving Serkan Yurekli's puzzle set for last year's 24 hour puzzle championship. I really liked them, although they caused more trouble than you'd expect for their size. Even though the puzzle idea is very similar to Japanese Sums puzzles, the Latin Square component in this genre makes solving a lot different though. Only later I found that the genre also existed on Naoki Inaba's website.
This is the first time I tried to create one myself. I like how it turned out. It's moderately difficult.

This puzzle uses the digits 1-5. 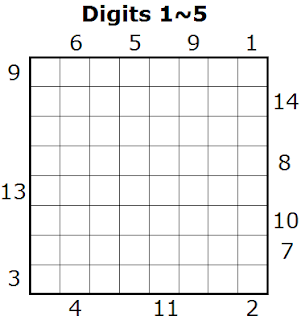 This genre was invented by Naoki Inaba

Place the digits in the given range once in every row and column. The numbers on the outside indicate the sum of the first digits seen from that side till encountering an empty square.
The example uses the digits 1-3. 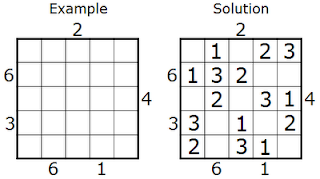 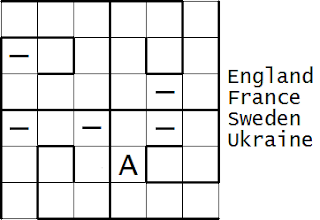 Today's puzzle is a variant on the LITS genre. I don't remember seeing it before. Constructing it went smoothly, although there were some points at the end where it caused trouble to keep it unique. Hope you all like it.

Colour some squares to form a single contiguous wall. The wall has no 2x2 coloured areas anywhere. In each blackbordered region a shape of 4 orthogonally connected squares remains empty. Identical shapes in different regions can't touch eachother by a side. Rotations and reflections are considered the same shape. 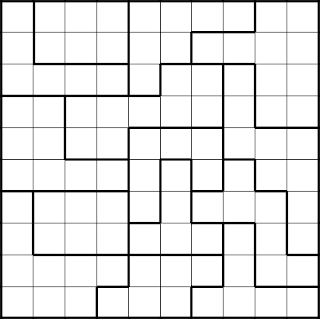 This variant was my favourite in constructing during the whole TVC practise series. This was because I was able to do the most with it. I have always loved Magnets puzzles. The first time I encountered them in the Dutch magazine Breinbrekers, I instantly liked how the logic worked. Somehow it just clicked for me. I always have fun constructing them as well. You can have fun with them, especially if you leave out clues like in these puzzles I put on PuzzlePicnic: #1242 and #2160. The combination with Tapa makes for a whole different way of construction. But I liked them best where the Magnets clues lead to the most deductions, instead of the Tapa part.
I think the puzzle worked out well. I wanted to make a 111 themed puzzle and I think it worked out well. It's made in a 11x11 grid. There is one single 111 Tapa clues. It is almost perfectly themed with the magnets clues as well. Each side has 6 1 clues. Just couldn't get the columns set as a three 1 clues for both plus and minus. But I like how it turned out in the end.

This week's puzzle making has been one big stretch of it-just-will-not-work. About every puzzle I tried to make, wouldn't work the way I wanted. When you add to that a bit (or a lot) of stubbornness and I end up restarting a lot of designs and constantly coming to the same conclusion and having to restart.
This puzzle hasn't been any different. I had a certain idea but every time I tried to execute it, I would be forced to break the opening and thus had to restart. So eventually I made it slightly different and an easier version of it. This is the result. I like the opening. I haven't fully checked if there are other ways to open it up, but I like where the intended one is located and how it runs the rest of the puzzle. The puzzle isn't easy, but I wouldn't say overly challenging. Just keep track well in all grids and you should be able to solve it.

Place 3 stars in every row, column and boldly marked area. All grids have the same solution. You'll need to use all grids to get to the solution.