So, result-wise this was my worst performance of the series with a 17th place. I think I solved pretty well during the test though. I wasted some time on the large Compass and large Twilight, which I just couldn't crack. The Twilight Tapa was a bit sad as when I resolved it I noticed I had forgotten to put down one simple cross, which set the whole second half of the puzzle in motion. Thus I should have been able to do it. But overall I solved in good speed, no real breaking points and was overall happy with my performance. This was of course till I saw the results and had 12/16 marked correct. I had forgotten to colour one duplicate symbol in the Sweeper Tapa, I had forgotten to colour the 21 clue in the left bottom at the end of my solve even though I had concluded it depicted the white cells around it. I ahad lso messed up the way to enter the key for the Tapa-like Loop. The first one I did completely the wrong way, but I got the points for it because they were all +1. Somehow for the large one, I only did the first segment of A wrong but the rest correct. This of course led to a mix of correct and incorrect numbers and thus I didn't get the points. I had at least solved it correctly on paper.
I think this practise kit helped myself best in preparing out of all 4 tests. There were a few puzzle types for which I hadn't completely figured out how they would look or feel. Making them helped me a lot. I think it definitely increased my Wired Tapa solving, which I found surprisingly fun to solve. Also the Tapa-Like Loop puzzles were a lot easier when I figured out a few tricks from the genre while making them. I think my Twilight also should have helped well for the test puzzles.

Overall I finished 4th, which seems appropriate I think. But I do think this normalised system with best 3 out of 4 isn't 100% perfect. Because if I hadn't made the small solving and answer key mistakes, I would have beaten Hideaki comfortably in this test and would have thought it might have been good to beat him for 3rd place as I did exactly what I had needed to do. Except because Palmer beat everyone by a mile, this whole test wouldn't have counted as everyone's normalised score is very low. And I don't think it accurately depicts the difference between all players. Really it now only compared everyone to Palmer as he was just better than the rest. I feel that if you take Palmer out of the equation in all tests, that you might see a bunch of shifts in the leader board as TVC XII would be far more influential than it is now. Nyuta and EKBM did particularly well compared to many in this test, but only got a normalised score of 720 and 685 to show for it, which seems a bit unfair. It might be better to do something similar to the CTC, where not only the highest score sets the mark but a group of the best scorers. That way it could lead to a better representation overall for all players. I'm not sure of this and can't really run the numbers very quickly on what the results would be, but I'd be interested to see though if someone feels like it.

I'll also talk a little bit about the CTC here. I finished 5th overall. I had a bit of a false start in the first 2 weeks with a lot of errors. Halfway through it became clear that Palmer was running away with this one. Hideaki and Nyuta settled into a comfortable 2nd and 3rd and there was a group of 5 players who formed a subtop, which included me at 8th place. This was kind of the point where I thought 4th place was the highest possible, which I had talked to Zoltan a bit about. I started in 8th place and slowly made my way up. Then there was a week of harder puzzles, through which I made my way pretty well and in which Hideaki and Nyuta dropped some points and all of the sudden 3rd place became a possibility. I made it to 5th place behind Zoltan, who came agonisingly close to taking 3rd place, but eventually had to concede 4th. Sadly it wasn't to me as Psyho overtook me on the same day I overtook Zoltan. Two days before the end I had a bad solve and lost all chances on 3rd place. Psyho came pretty close to getting 3rd, but made a mistake on the last day. I just missed out on getting 4th though. If there is another CTC next year, I will know I'll have a pretty good chance of reaching the top 3 as long as I stay a bit more mistake free as I really made far too many mistakes. Or if the penalty for mistakes isn't so big.

Okay, enough talk. I still have one Tapa puzzle for you all. It's a Tapa Tapa, which didn't match the rules. I really liked this puzzle. It worked out well. I know not all cities can be defined, but the Tapa Wall is unique though, which I think should be good enough.


Tapa Tapa
Follow regular Tapa rules. Additionally each train represents a city. The shortest possible distance between certain cities are given. The shortest distance is the shortest of all routes traveling horizontally and vertically along the Tapa wall that touches 2 cities (diagonal touching is enough).
[Note: There is no clue restriction on the cities, the wall can touch them any way possible] 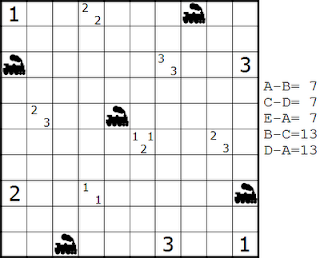 It's been a while since I have done one of these. I had been trying to play around with Ripple Effect/Heyawake and Ripple Effect/Regional Yajilin, except those never came off the ground much. It didn't feel that nice as I had to overload the Ripple Effect puzzles with uneccesary clues to get the other puzzles unique. So I thought that maybe Heyawake and Regional Yajilin might work as they can have a comparable amount of necessary clues. I found it a bit hard to make it work with rectangular regions, so I gave irregular reginos a try and that turned out a lot better. They're both not the hardest puzzles, but I like how they turned out.

So firstly this puzzle have be solved as a Heyawake (wacky) puzzle. Opposed to normal Heyawake the puzzle has irregular rooms. The white area still can't span over two or more boundaries, even if they belong to the same room. This one is probably the easiest Heyawake on my blog.
Secondly it can be solved as a Regional Yajilin puzzle. It's not too hard, but it has some trickier steps than the Heyawake, but these are more because of the genre type. 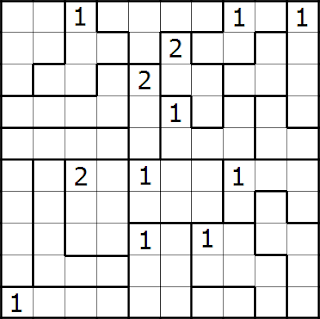 Colour some squares, so that a single closed loop can be drawn through all remaining cells. The loop run horizontally and vertically through the centers of the cells. It can't touch or cross itself. No two black cells can share a border. The grid is split up into different regions. A number in a region indicates the amount of cells that need to be coloured in it. 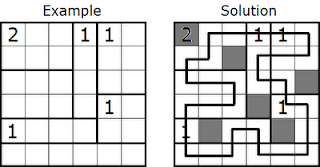