This round was provided for this year's UKPA Open. The round was themed around arrows. I had thought of making a set themed around arrows before. There's a lot of genres that use them, so it could lead to a varied set. I gathered a lot of different genres and tried to select a set that created a significantly varied set. I think I managed to select types that used arrows in different ways. There were a few genres I had tested, that didn't end in the set as they turned out too difficult, or not very enjoyable. A few of the types turned out harder than I thought and I added an easier puzzle to that section.
The set was 75 minutes during the championship. An instruction booklet can be found here.

It's been a while since I've posted puzzles, almost a year actually. This month I'll be posting a few sets that I've provided to numerous puzzle championships over the last few months.

The first puzzle will actually be a puzzle that never appeared in a championship. It was originally was designed for the YKPA Open. The reason for this is that it came back as unsolvable by one of the testers. In the many years of having my puzzles tested, I haven't ever gotten the message back that a puzzle couldn't be solved, unless it had an error in it. This puzzle though, did not have any error. The problem with this puzzle was that I had made an assumption. This assumption involved a characteristic of loops, that I thought was well known and obvious. Both my testers weren't aware of this characteristic at first and only one could figure it out while solving. It was supposed to be a somewhat easy loop puzzle, but thus turned into a much harder puzzle, which I had no way of scoring the difficulty of accurately. So I decided to keep it out of the set. There's a hint below in case you need some help in solving the puzzle.

Rules for Arrow Loop:
Draw a single closed loop that travels through each cell exactly once. The loop is not allowed to touch or cross itself. Arrows in the grid indicate the direction the loop travels in from that cell. 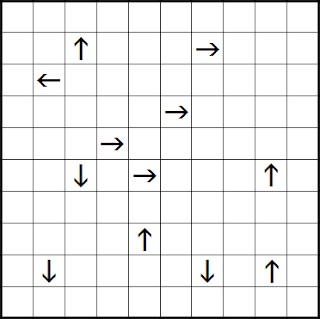