I always like polyomino placement puzzles. I tried to do something different with it. I thought the retrograde feature, which I had first encountered in Breinbrekers would work well. I thought using tetrominos would lead to a nice easy puzzle.

Colour every tetromino exactly once so that no 2 shapes touch eachother, not even diagonally.
Rotations and reflections are considered the same shape.

I'd already said before I liked this genre for its simple rules. So I thought it would work well in the set as a simple loop puzzle. I thought it was an easy puzzle, but the test times were a bit higher than I expected mostly. So I raised the value of this puzzle a bit for that reason. 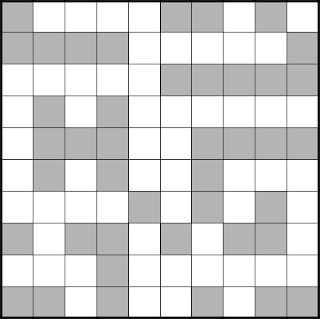 The theme of the construction is clear in this one. This was an adaptation of a puzzle I had made before, which had one side with 2 different letters. A little bit of tweaking and this one popped up. It's not overly difficult, but there's one tricky step in the middle.

Place the letters A~D once in every row and column. The digits on the outside indicate what letter is
seen first in that row or column from that direction. 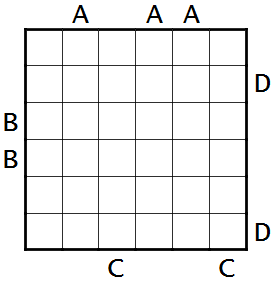 I usually try to get symmetric givens in a Masyu, but I tried something else this time. It should stand out. Most of it solves very quickly, but as with most my puzzles there's one point you could get stuck. 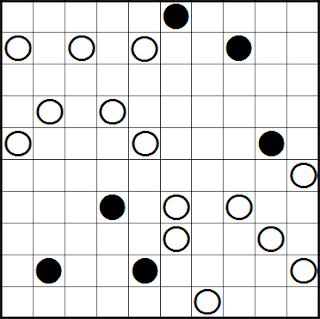 This was only the second time I made one of these puzzles. I haven't really figured out yet how to make them hard though. The problem I always run into when I try smoething more difficult is that I can't get to a solution as the different parts won't connect anymore. Nothing particularly challenging about this one.

Connect all islands by horizontal and vertical bridges so that all islands form a single network.
There are never more than 2 bridges between two islands. The numbers on the islands indicate how
many bridges are connected to that island. 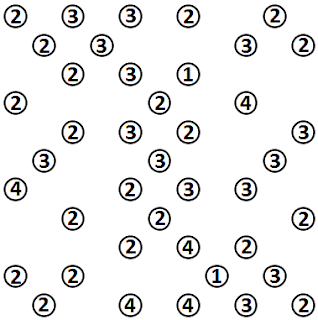 I like how this puzzle worked out. It's the kind of logic I find fun to put in. It's logic that you'll see in any puzzle type, where touching isn't allowed. Tents is also a prime example of it.

Place 2 stars in every row, column and black bordered area. Stars never touch each other, not even
diagonally. 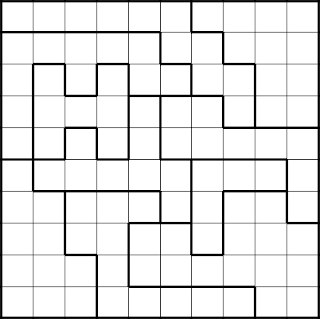 I liked this idea when I came across of it. They always feel challenging when you solve them. I feel that's because there's always a very narrow path through the opening. This puzzle has an easy opening. It's helps understand the logic involved. It's still a tough puzzle, especially considering it's only 6x6. With the right insight, it's nicely solvable though. I thought it was something different, that would make it a bit more varied.

Place an arrow for all four directions (up, down, left right) once in every row and column. No arrow points at another arrow. Black walls block the view of an arrow. 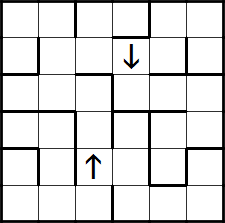 This is a medium to hard puzzle designed around the center 1-6 section. I think it worked out well. It has that challenging bit that I like to see in Tapa puzzles.

Colour some cells to create a single contiguous shape. The shape can't have any 2 by 2 coloured
areas. The clues in the grid tell you how many consecutive cells around it have to be coloured. If
there's more than one digit in a cell, the groups of cells have to be seperated by at least one empty
cell. Cells with clues remain empty.

Place digits 1~9 in some cells, so that no digit repeats in any row or column. The numbers on the
outside indicate the sums of consecutive digits in that row or column in order. Different sums are
seperated by at least one empty square.

This one was the harder loop puzzle in the set. It's something I thought off myself, but that doesn't mean it hasn't been done before. The name comes from a puzzle name for one of Naoki's puzzles named Gemini Block, which has a similar idea except with dividing the grid into regions. The logic in this puzzle is very narrow, till you figure out how the loop goes through each letter. 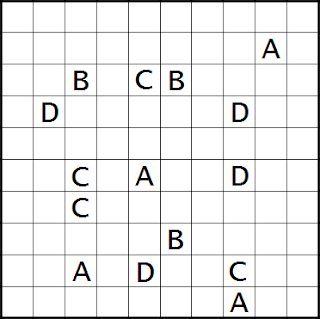 This is a simple Battleships variant. I had first seen it in Breinbrekers. But that goes for a lot of puzzle types for me. I thought it was pretty tricky, but most test times came back faster than I had expected.

Place the given fleet in the grid. The ships don't touch eachother, not even diagonally. The numbers
on the outside indicate the size of the first ship seen in that row or column from that direction.

I always like doing the Domino puzzles in Breinbrekers. Just one of those standard puzzle types I solved, when I just started puzzling. I added a small variation, just to make the solving a bit different. Logicwise of course nothing really changes.

As I had said in my last post, I like Magnets puzzles. It's one of three puzzle types in this set, which I know come from a Dutch puzzle maker (along with Star Battle and Japanese Sums). This is the hardest puzzle in the set, which is reflected in the point value. The logic is sound, just might take a while to find.

Place some magnets into the grid. Each magnet has a + pole and a – pole. Equal symbols can't
eachother by a side anywhere. The numbers on the outside indicate how many of each pole appear
in that row or column.

Breinbrekers always has very challenging Thermometers puzzles made by Tim Peeters. But those helped me pick up a lot of nice logic ways to solve them. This puzzle runs on my favourite type of deduction that can be made in Thermometers puzzles. Thus it looks exactly the way I like to see them. It is challenging though therefore. On a sidenote, this puzzle image took me the longest to make. A lot of copy past and rotating to make sure all thermometers were the same length and size.

The grid is filled with thermometers, which are either not filled, partly filled or completely filled.
The numbers on the outside indicate how many squares are filled in that row or column. Every
thermometer is filled from the bottom (the circle) upwards.