This is probably now the easiest Corral puzzle on my blog. It should still be fun. It has the shading layout instead of the loop layout now. I always solve them that way, but I've just been holding to the original layout.

Rules:
Draw a closed loop over the grid lines. The loop goes around all numbers. The numbers in the grid indicate how many cells inside the loop can be seen horizontally and vertically from that cell, including the cell itself. 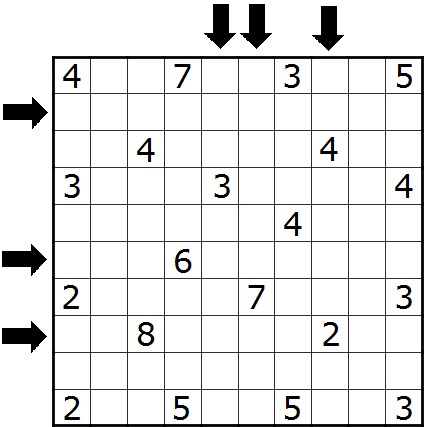 I'd never written this type before. I asked some examples from Zoltan before giving it a go. I think it turned out okay. I had to sacrifice symmetry to get it unique as I couldn't get it to work otherwise. And I liked the opening, so I stuck with it this way.
Rules:
Divide the given shapes into several regions along the grid lines. The sizes of the regions are given. Each number equals to the size of the region it is in. It is possible for a region to contain multiple numbers or none at all. It is also possible for two regions of identical size to share corners or edges. Black cells are not part of any region.

This was also a new type to me. Although it is pretty similar to the Island type. I tried to do something fun with the 1-8 circles. I had them set the same way (as the right bottom one), but I couldn't find a valid solution that way. I might be wrong, but my deductions didn't leave there to be one. So I flipped the right top one and think it turned out okay, not too hard.

Rules:
Shade some cells so that each number represents the total count of shaded cells in connected groups sharing an edge with that number. Cells with numbers cannot be shaded. 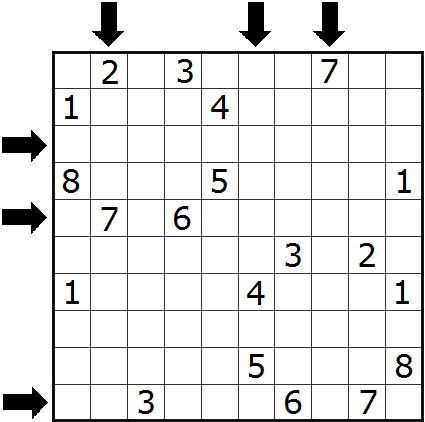 I used to solve these a lot when they appeared in Breinbrekers. I also wrote a few of them for Puzzle Picnic. But that had been a while. So this was one of the last puzzles I managed to make from the assigned ones. I think it turned out well. 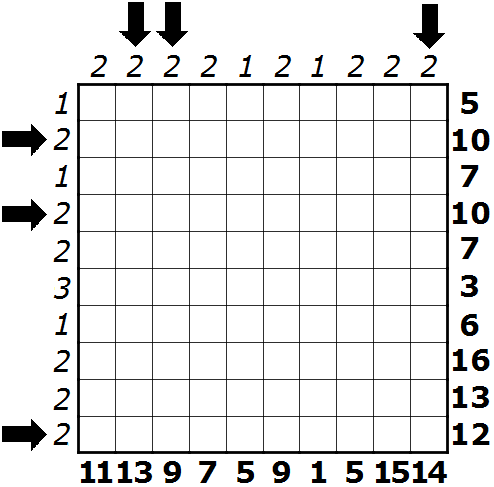 After the first puzzle turned out a bit hard, I played a bit with some easier openings. Putting two 10s in the puzzle helped that along. I think it's a nice puzzle really. It should be fun to solve.

Rules:
Draw a continuous loop consisting of straight sections into the grid in a way that the loop must not touch and cross itself. The numbers outside the grid show how many squares are used in that row or column by the loop. 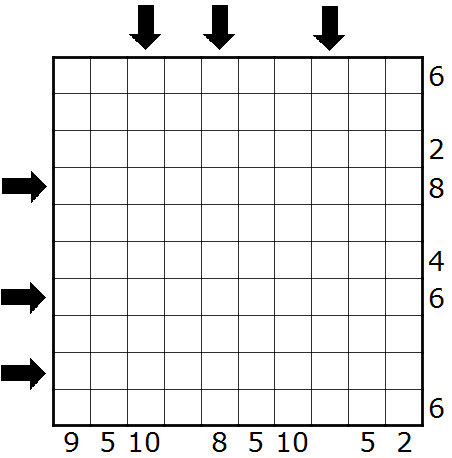 When I first saw the Laser puzzles I enjoyed them. But that got a bit less after doing a number of really hard ones that I just couldn't figure out logically. I really like the turns.mirror clues better than the row/column clues. so I decided to write a Laser puzzle with only turns/mirror clues. I think it turned out nicely and I like this better than the normal way it is presented.

Rules:
Draw a laser beam into the grid that only travels through the main diagonals of unit squares. The laser starts in the top-left corner and ends in the bottom-right corner.  Place a number of mirrors that are capable of reflecting the beam. Mirrors can be placed onto grid nodes (including nodes on the border) and should be oriented horizontally or vertically. Only one side of a mirror can be used this way, the beam cannot hit a mirror on both its sides. The beam can cross itself, though: each node where such crossing occurs is marked. 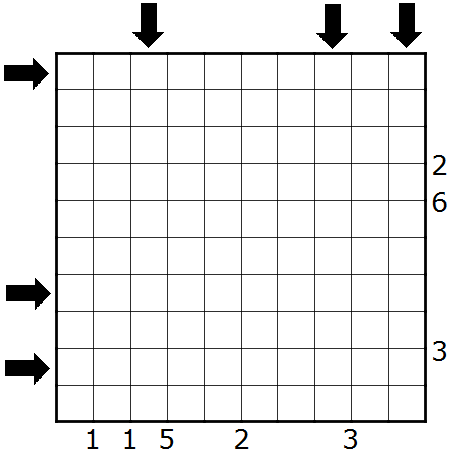 Most Retrograde Battleships puzzles I've seen are 8x8. I first decided to try to write a 10x10 puzzle, but I couldn't get it to work. When I reduced it to 9x9 this came out. The hardest thing was thinking of a good opening, but I think this is a nice way to do it.
Rules:
Locate the position of the given fleet in the grid. Each segments of a ship occupies a single cell. Ships are oriented either horizontally or vertically, and do not touch each other, not even diagonally. The possible placements of the ships are given. 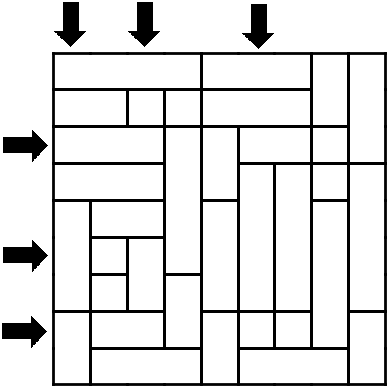 8. Star Battle
Just a relatively simple Star Battle. It is somewhere in between the two from the individual round.
Rules:
Place 2 stars in every row, column and black bordered area. The stars can't touch eachother, not even diagonally. 9. Tetromino Areas
The first regions puzzle I thought of that didn't use number clues was Pentomino Areas, but I thought it might turn out too hard. So I decided to scale it down to two tetromino sets instead. I used a nice POL layout that seems to work well as an opening for this genre. I realised after a while this used 10 areas like Star Battle, so I think it might be possible to create a Double Trouble of this that works as a Star Battle as well.

Rules:
Place two complete tetromino sets, one in each of the outlined area. Pieces can be rotated and / or reflected, but they cannot touch each other even at a point. 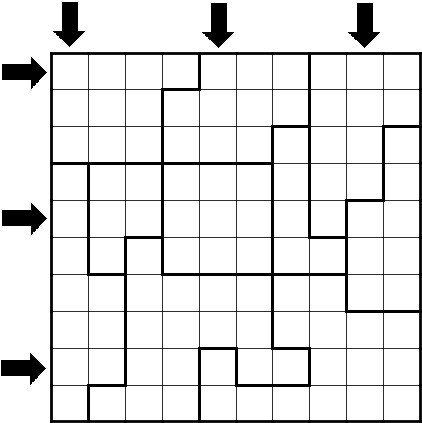 10. Penta Blokus
Zoltan suggested a puzzle where not all pentominos are used, like in Pentopia, so that it could remain smaller. I think it's a nice puzzle. It's not too hard if you realise one standard opening for this genre.
Rules:
Place some of pentominos into the grid so that no piece appears more than once. Rotations and reflections are considered the same shape. No two pentominos can share an edge. They can touch diagonally, but every node where two pentomino pieces share a corner are marked with a dot. Rules:
Draw a single, non-intersecting loop that passes through all circled cells. The loop must go straight through the cells with white circles, with a turn in at least one of the cells immediately before/after each white circle. The loop must make a turn in all the black circles, but must go straight in both cells immediately before/after each black circle. 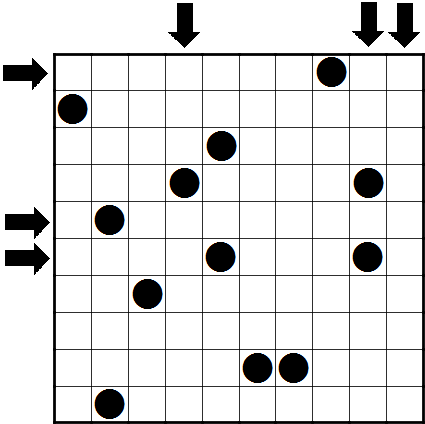 12. Finnish Snake
I has some trouble thinking of a circles puzzle to make, besides the ones already used. I looked a bit through the black and white matchmaker, but I couldn't really think of a good puzzle type I could see myself turning into a monotone puzzle. Then I remembered Finnish Snake, which always used circles as clues. I gave it a few goes for a nice one to turn out and this is the final results. It's not overly hard, but I think I used the circles nicely.
Rules:
Draw a snake into the grid which consists of horizontal and vertical segments, never crosses itself and never touches itself, not even diagonally. The snake starts at top-left corner and finishes in the bottom-right corner. The snake goes through all given circles. 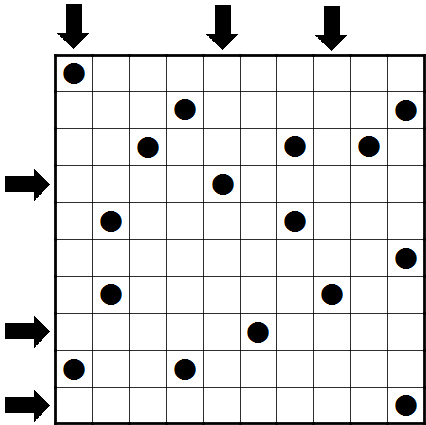