I've been writing a bunch of low clued Snake puzzles recently, because I always like them. The logic suits me and I know how to get them to work logically. The first one is based on the 24 clues at the bottom. I place the Head and Tail of the Snake in a place that would force a nice deduction and added the clues on the right to get it unique. The second puzzle is the harder of the two in my opinion, using a simple 1-8 theme, but that doesn't make the solve simple.
These puzzles were solved by 9 and 7 people during the championship.

Rules:
Draw a one cell wide snake in the grid. The snake is not allowed to touch itself, not even diagonally. The head and tail of the snake have been given. Numbers on the outside indicate how many cells are occupied by the snake in that row or column. 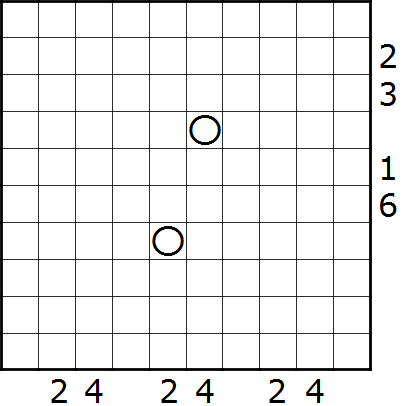 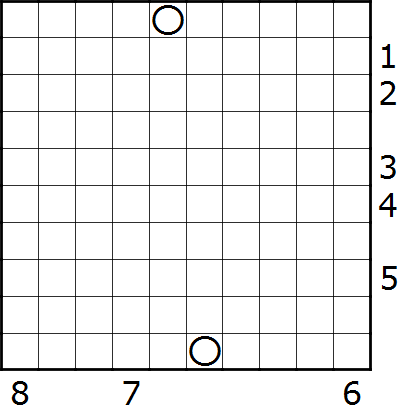 This is one of my word puzzles in this set. It is of course more an arithmetic puzzle but it uses words. So I'm saying it counts. I decided to only use 9 letters in the puzzles as then I could write a few quick puzzles. The first one is pretty easy, as the words suggest. The second one is a bit harder, as the words might also suggest. It uses a small trick for the opening, without which it can hardly be solved logically.
These puzzles were solved by 19 and 4 people during the championship. 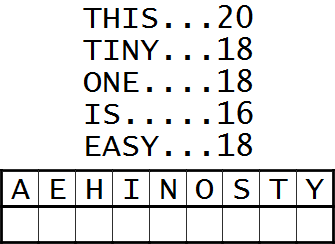 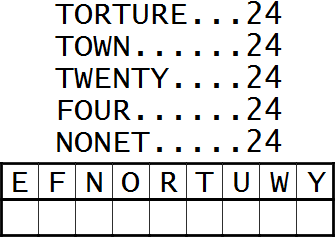 This was my second attempt at a word puzzle. It doesn't actually use words, but numbers instead. But it's still a word placement puzzle. I generally have trouble writing word puzzles, but this was a way I could put in some logic that suits me. I haven't seen puzzles like this before, but I'm sure palindromes have been uses before in word puzzles. This puzzle is just a matter of comparing how the line interacts with different number places and see which numbers fit those restrictions. The theming should be obvious.
This puzzle was solved by 12 people during competition.

Rules:
Place the given numbers reading from left to right in the 2 grids without overlapping. Numbers along the grey lines must form a palindromic sequence (it must read the same front to back as back to front).

I always find these puzzles hard to construct, especially checking uniqueness. It's not overly hard to make one, but it's harder to make them so they're interesting. I like how the shapes turned out and with the right opening deduction it shouldn't be too hard to get through.
This puzzle was solved by 17 people during competition.

Rules:
Divide the grids into pentominos so that each pentomino is used exactly once. Rotation and reflection is allowed, but they are still considered the same shape. 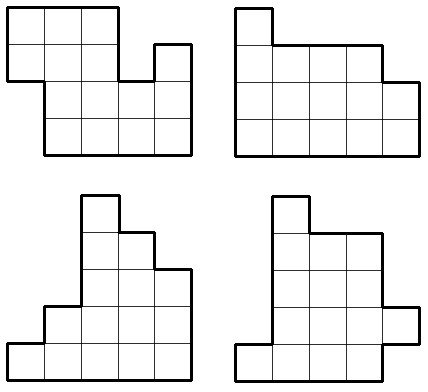 5. Pentomino (65 points)
I've written a few of these low clued puzzles that still have a nice solving path. I started this puzzle with XXIV as black squares for the 24 theme. My original opening led to no solution, but I could create a solution if I added a black square and a slightly altered solution. The use of only 5's and 7's is purely coincidental. The places where I could best use clues were three 5's and a 7. The last clue I needed to settle a single uniqueness issue and I had the option of choosing between 3, 4, 6 and 7, so 7 seemed the obvious choice. There's a tricky deduction after the opening, but if you get that one it's not too hard to get this puzzle out.
This puzzle was solved by 8 people during competition.

Rules:
Place all 12 pentominos once in the grid so that they don’t touch each other, not even diagonally. Rotation and reflection are allowed. Numbers on the outside indicate how many cells are occupied by the pentominos. Black cells have to remain empty.

I like writing Slitherlink puzzles and putting something interesting in them. I think it worked out with this one. I used four different orientation of 0-3 in a S-tetromino shape as my starting point. I like the opening for this puzzle and it runs on from there pretty smoothly.
This puzzle was solved by 13 people during competition.

Rules:
Draw a single closed loop by connecting dots horizontally and vertically. The loop is not allowed to touch or cross itself. Numbers in the grid indicate how many of the four segments around it are used by the loop. 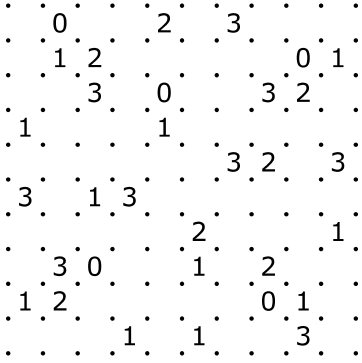 This is a variant I have posted before on my blog. I think it creates for fun interactions between givens and empty cells. The opening is not very hard as long as you keep your eye on the cells touching clues. In the end there's some harder deductions, but once you get there you should be able to finish the puzzle none-the-less.
This puzzle was solved by 5 people during competition.

Rules:
Draw a single closed loop by connecting dots horizontally and vertically. The loop is not allowed to touch or cross itself. Numbers in the grid indicate how many of the four segments around it are used by the loop. Additionally cells touching givens orthogonally can’t have the same amount of line segments as that given. This only goes for cells with givens, not any other cell. 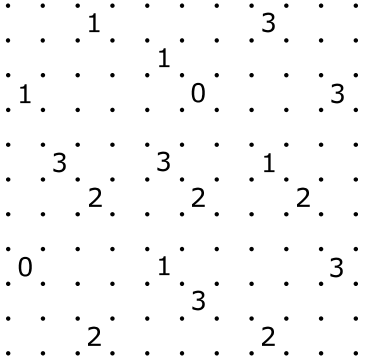 This was my only Sudoku in this set. The puzzle isn't very hard. The opening is pretty simple, but it gets a bit harder to the end. I don't think it should cause too many problems though.
This puzzle was solved by 11 people during competition.

Rules:
Place the digits 1-9 once in every row, column and marked 3x3 area. Relationship symbols between cells indicate which of the two cells is bigger. 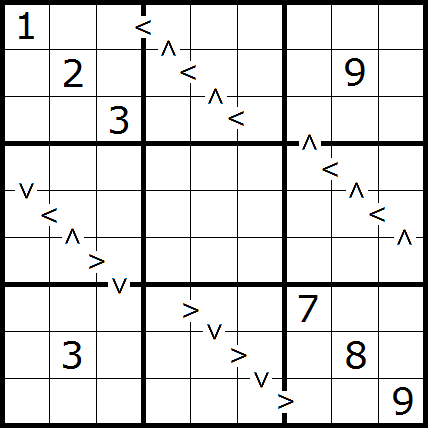 I accidentally didn't follow the correct rules when constructing these, but I only found out when questions were asked. I had used the rule that every letter had to indicate a different pentomino. And as my opening used that rule, I couldn't really fix it. But I figured that didn't really matter that much. I used the XXIV theme again in this puzzle. It seemed an obvious way to go with this type.
This puzzle was solved by 12 people during competition.


Rules﻿:
Divide the grid into pentominos. The letters in the grid indicate the shape which that cell is part of. Each letter is part of a different shape. Equal shapes can’t touch each other orthogonally; diagonal touching is allowed. Rotations and reflections are allowed, but are still considered the same shape. 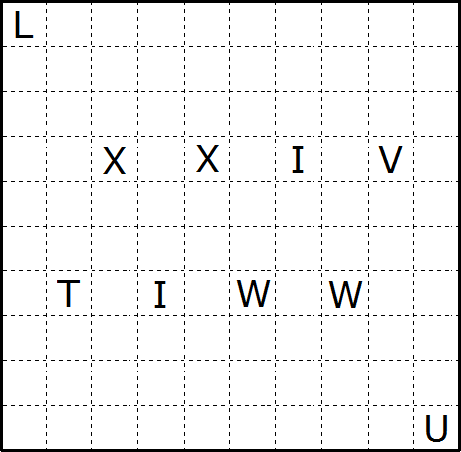 This is one of the simpler puzzles in the set. I chose for an obvious 2/4 theme for this puzzle. I figured that would work well after having made an all 4's puzzle before.
This puzzle was solved by 17 people during competition.

Rules:
Draw a single one cell wide loop in the grid. The loops can’t touch itself, not even diagonally. Numbers in the grid indicate how many of the up to 8 cells around it are occupied by the loop. 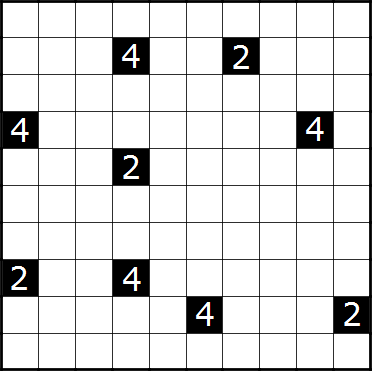 11. Kurodoko (40 points)
I try to always get a bunch of different types in the set. This fell under the Heyawake/Hitori category where black cells can't touch and white cells must form a single contiguous area. I have no good single word description for this like loop or word puzzles, but it would be useful if there was. you can do something with the 12 at the start, but the real opening lies somewhere else. It's a bit tricky, but once you have it, it should solve without much trouble.
This puzzle was solved by 11 people during competition.
Rules:
Paint some cells black, so that the remaining white cells form a single orthogonally connected area. Black cells are not allowed to share an edge. Numbers in the grid indicate how many white cells can be seen horizontally and vertically from that cell including the cell itself. Their view is blocked by black cells. 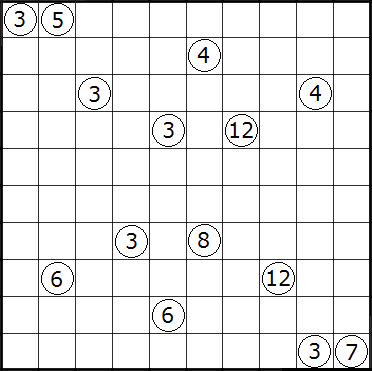 This is another obvious 2/4 theming. I wasn't sure how well it would work as I'd never actually written these puzzles before. I felt I had to add more clues than I would have liked, but it solves well. Nothing really tricky.
This puzzle was solved by 15 people during competition. 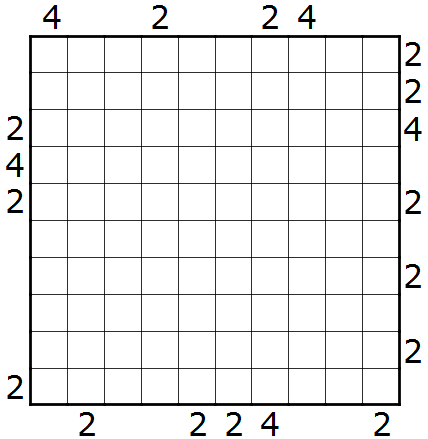 People have commented before that it really shouldn't be called LITS as the O tetromino is also allowed, but I feel it helps bring over the idea behind the puzzle type better. It really just uses the idea of LITS, except on the white squares. I started with the 2/4 areas and found a way to use these shapes to my advantage. To find the opening, you have to understand some general principles about these types of shading puzzles like LITS, Nurikabe and Tapa, especially on how black cells force white cells. But after finding the opening I think it should solve pretty well.
This was the least solved puzzle in the set with only 3 solvers. They all happened to be German.

Rules:
Colour some squares to form a single contiguous wall. The wall has no 2x2 coloured areas anywhere. In each blackbordered region a shape of 4 orthogonally connected squares remains empty. Identical white shapes in different regions can't touch each other by a side. Rotations and reflections are considered the same shape. White cells may form 2x2 areas, even within a single region. 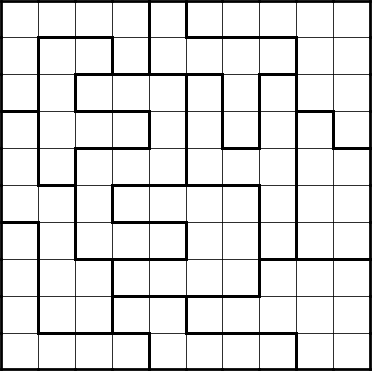