These are one of the first puzzle types I encountered as they were in Breinbrekers. They could be pretty tricky. This one is somewhat challenging. It has a few key areas to look at to make progress. I didn't put any X's in as I prefer them that way. With X's they turn more into an Simple Loop puzzle. 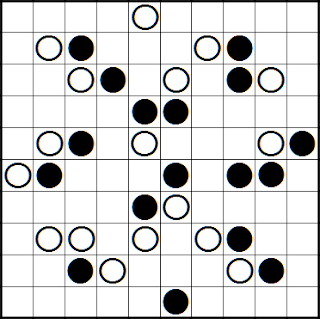 This puzzle cost me the most effort creating. There is a heavy limit on the loop size. The length has to be divisible by 6 or else there will be no solution. I think it turned out somewhat easy. I'm guessing the test puzzle will be much harder than this, because of the score.

Draw a single closed loop passing through some cells in the grid. This loop is
snake-like, that means the loop cannot touch itself, not even diagonally. Every
3rd square of the loop has a dot on it. Numbers outside the grid reveal how
many dots of the loop are in the corresponding row or column. The squares
marked X are not part of the snake. 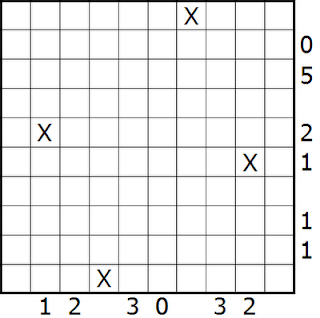 There's been a few Tapa variants similar to this. Important thing to remember is that the loop doesn't obey the Tapa clues. Just the Tapa wall. This genre shouldn't be too hard as there are again a lot of restrictions of how the loop can go because of the no 2x2 square rule.

Blacken some cells to create a continuous wall. Number/s in a cell indicates the
length of black cell blocks on its neighbouring cells. If there is more than one
number in a cell, there must be at least one white cell between the black cell
blocks. Painted cells cannot form a 2x2 square or larger. There are no wall
segments on cells containing numbers. Then draw a single closed loop passing
through all blacken cells. The loop cannot touch or cross itself. 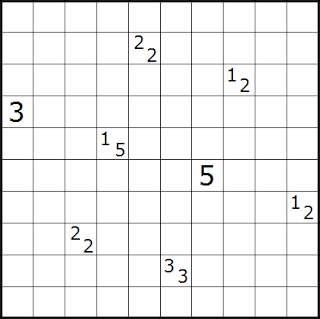 This one is my favourite out of the 5 I made. It's a tricky puzzle, but I think it worked out nicely. I didn't put all pentominos in, because that would mess with the logic i was trying to use. Remember that the pentominos can't reach the edge of the grid.

Place some given pentominoes along the grid lines so these pentominoes can´t
use any dot or line of edge. Pentominoes cannot touch each other and they
may be rotated and/or mirrored. Then draw a single closed loop passing
through all cells in the grid. The loop cannot touch or cross itself. You cannot
cross placed pentominoes. Some segments of pentominoes should be given.
There are no loop segments on cells marked X.

This puzzle also took a while to get unique. The puzzle is fun though. Not too hard once you get the hang of how the genre works. I don't feel these will be very challenging in the test.

Place some stars in the grid so there is exactly one star in every row, column
and outlined region. Stars cannot touch each other, not even diagonally. Then
draw a single closed loop passing through all remaining cells in the grid. The
loop cannot touch or cross itself. There are no stars or loop segments on black
cells. 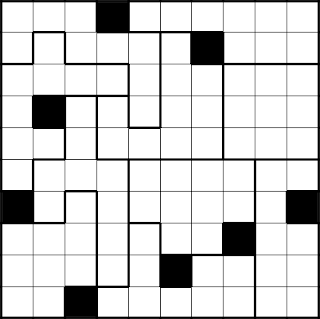