The UKPA Open 2016 was held in Croydon on February 27th-28th. As an intermission between the competition and the ceremonies there are team rounds to keep the competitors busy so they don't cause any trouble. I provided one of the team rounds.

The concept of this team round is a bit easier than last year's. All puzzles in this set are unique by themselves. The interaction between the puzzles doesn't come till you have solved them. I tried to rank the puzzles so people could divide the puzzles between their solvers appropriately. Once you've solved all puzzles the second step of the solve comes into play. You have to divide all puzzles in three sets of 4 puzzles, one from each genre, so that all solutions, when placed on top of each other, use every cell at least once. I thought it would be an interesting idea and I think it worked out well.

Puzzles can be found below. Enjoy.
Team Round Rules

There are four sets of three puzzles. Each set contains three puzzles of the same type. Each puzzle involves shading some cells to form the solution.
After solving all puzzles divide the solutions into three new sets, so that each set contains one solution from each type. When overlaying the four solutions in each set, without rotation and/or reflection, every cell must be coloured at least once.

Place the given fleet in the grid so they don't touch each other, not even diagonally. The fleet is made up of square segments, so middle and end sections look the same, as well as single cell ships. Number son the outside indicate how many cells are occupied by the fleet in that row or column. Some ship segments may be given. Cells with waves must remain empty. 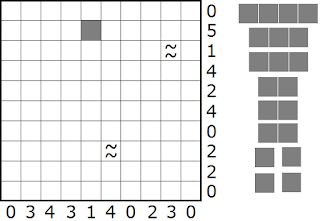 Draw a one cell wide loop in the grid that doesn't touch itself, not even diagonally. Numbers in the grid indicate how many cells around it are used by the loop.

Place some pentominos in the grid so that they don't touch each other, not even diagonally. Pentominos may not be placed more than once. Arrows in the grid indicate all directions of the closest pentomino(s) when looking from that cell.

Shade some cells to form an orthogonally connected wall. This wall may not cover a 2x2 area anywhere. Clues in the grid indicate how many consecutive cells have to be coloured in the cells around it. If there's more than one number in a cell, the groups of cells must be separated by at least one empty cell. Cells with clues must remain empty. 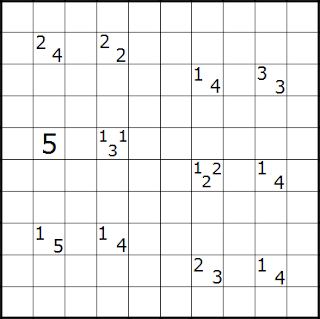