This puzzle has one of the simpler openings I could think off that uses no 2 cell regions. It pretty much flows from the opening onwards.

Colour two cells in each black-bordered region, so that each black cell shares an edge with exactly one other black cell. Black cells may touch within a region, but don't have to.
﻿﻿

As this was my first time designing these, I tried to find some straightforward deductions. You still have to understand the genre to get through this puzzle though.

Colour some cells so that they form triominos. Each triomino must be cut twice by a black border. Different triominos must not touch each other by an edge. Each black-bordered region must contain exactly three coloured cells. Cells in the same region may belong to the same triomino.

I chose for a visual UK theme for this puzzle. The U shape was actually really handy, but the K shape took a while to work. It had a lot more options for tetrominos.

Place the given set of tetrominos in the grid so that they don't touch each other, not even diagonally. Tetrominos may be rotated and reflected. Each black-bordered region must contain a single tetromino. 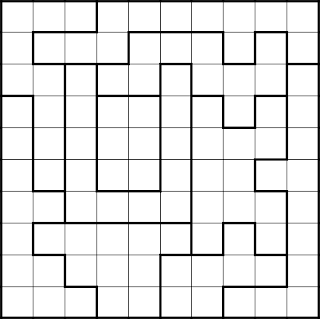 4. Pentomino In A Box

I generally find this puzzle type pretty hard. I opted to choose a standard opening and try to build the puzzle from there. People who've solved more of Richard's puzzles should get through this pretty quickly.

Place the given pentominos in the grid so they don't touch each other, not even diagonally. Pentominos can be rotated and reflected. Each black-bordered region must contain three coloured cells that belong to two different pentominos. 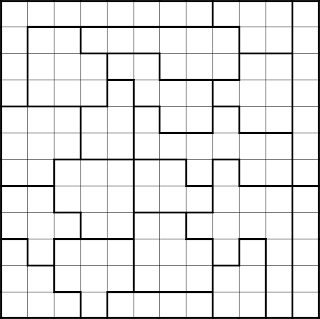 I wanted to have one region size 16 in the puzzle. It actually worked out really well in this puzzle as it was the exact clue I needed. The puzzle worked out really nicely and it turned out exactly as I hoped it would.

In this Nurikabe, you must be able to partition the stream into non-overlapping dominoes.

This puzzle turned out a bit harder than I had hoped for. But I didn't have as much freedom in choosing the clues as I wanted after the straightforward opening.

In this Tapa, you must be able to divide the wall into the given triominos. 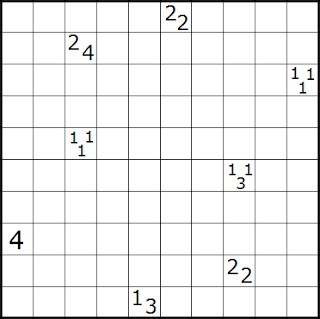 It should be clear which four are the predesigned cages around which the puzzle was built around. The of course don't interact, but they have influence on the same cages. It's a bit less obvious because of this where to start.

I really like the look of this puzzle. There's a lot of open space left that the pentominos force. There is an important deduction to be made at the start, which when missed makes the puzzle much harder.

In this Slitherlink the loop has to be completely filled with the given pentominos. Each pentomino must be used exactly once. They may be rotated and reflected. Pentominos may only touch each other by a single edge. Nowhere do three or more pentominos meet at a point. 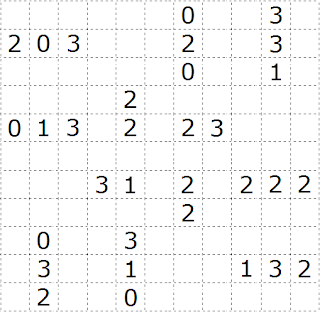 This is a simple puzzle. The design started with the first, third, fifth and seventh column, which are placed in a cyclical 0-6 pattern. The rest of the numbers were then added to make it unique.

Divide the grid into dominoes, so that each of the given pairs of numbers appears in exactly one domino.

This puzzle has a nice opening. It's not too hard, but if you don't see it you can't start the puzzle. It's not overly difficult after that.

Colour some cells black. Black cells are not allowed to share an edge. Divide the remaining white cells into triominos. Each triomino must contain exactly one digit. This digit indicates how many black squares it shares an edge with.
﻿

11. L-Dissection
﻿
This puzzle isn't really anything special. It's merely a way of working through the puzzles. There's a few places to find openings which eventually lead to a single end.

Divide the grid into L-tetrominos. Each tetromino must contain exactly two circles.

This is a pretty standard Pentominous puzzle. There's really only one tricky deduction to be made. I still think it's a nice puzzle.

Divide the grid into pentominos, so that no two pentominos of the same shape share an edge. Rotations and reflections are considered the same shape. Letters in the grid indicate that this cell is part of a pentomino of that shape. Pentominos may contain multiple letters or no letter at all. 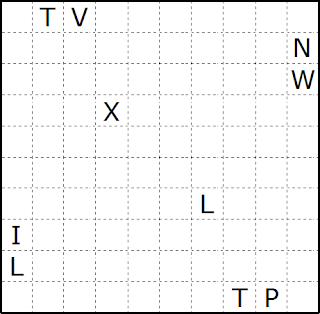 This is a pretty simple puzzle of this type. Nothing much else to say about it.

Place the numbers 1 or 2 in some cells. Clues in grey cells indicate the sum of the digits in the white cells around it.

I like this opening. It also showed up in the Polish Online Qualifiers. This puzzle doesn't have any of the extra givens that puzzle had though.

I've been having fun designing these puzzles. This is the second 8x8 1-4 puzzle I wrote that only uses three givens. I'm not sure whether a two clue puzzle is possible, because I've explored a lot of very influential two clue givens, but none of them actually results in a unique puzzle.

I think designing these puzzles is always fun. You can always set up nice chains of similar digits. In this puzzle I've been nice and place the givens at the start of chains instead of at the end of chains so you can just place digits in order instead of having to discover the chain to be able to place the digits.