The 13th 24 Hour Puzzle Championship was held last weekend. Nikola Zivanovic was the winner, with a close margin over Florian Kirch in second place. Peter Hudak completed the podium finishing third. Full results can be seen here.
I think this set worked out better than last year's. The topscorer in my set was Florian Kirch with 845/1000 points and everyone solving scored at least 100 points.

Opposed to last year, I will release my entire set in a single post. Last year I was still trying to keep up one post a day, but I've let that go for a while now. The post will not contain any examples, but you can see examples of each genre in the instruction booklet. My set is the 12th set, so you'll have to scroll down a bit. The puzzles have their value listed and are valued at about 10 points per minute.

I included this type to give some easy points. You can technically get through them with some logic, but usually these are just easiest to try and adjust. It's not the most interesting, but it's one of those type of puzzles that features in every WPC at least once. I made an effort to at least make the designs have a bit of theming with the one puzzle having all givens of 2 connected black cells and the second all givens of 3 connected black cells.

Rules:
Colour some hexagons, so that the remaining white hexagons form 6 seperate areas of 6 connected hexagons. 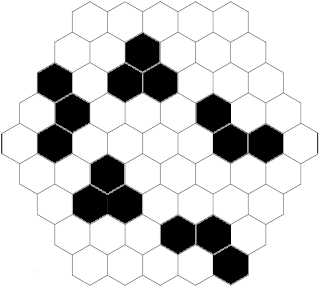 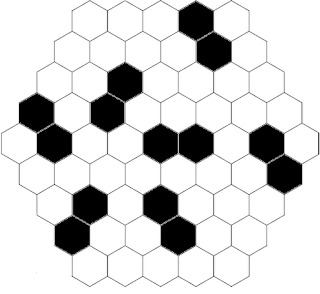 These are one of the easy standard types I put in. There's very little challenging about these 2 puzzles.

Rules:
Place the the letter A~D once in every row and column. Letters on the outside indicate which letter is seen first in that row or column when looking from that direction. 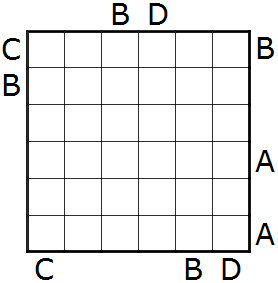 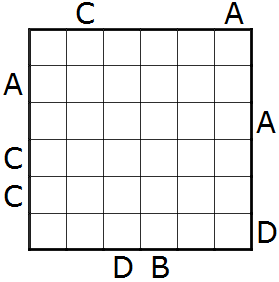 This is the second standard type. I think the puzzles worked out nicely. The first one is a numberless puzzle where all trees are arranged in pairs. Once you figure out the first trees, it shouldn't be too much trouble. The second puzzle is based around the numbers 2 and 4 and solves a bit differently than the first.

Rules:
Place a tent ortogonally next to each tree so that no two tents touch eachother, not even diagonally. Numbers on the outside indicate the amount of tents that are in that row or column. 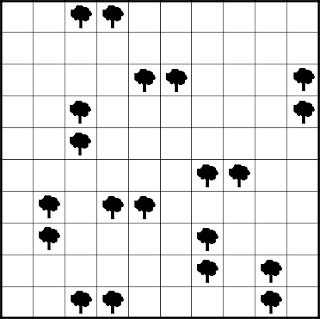 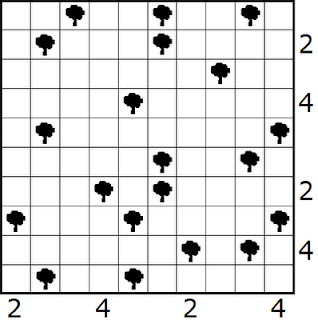 This is a puzzle type I've always found interesting. In the beginning I tried to make harder puzzles, but at one point I switched to making more aestetically pleasing puzzles, which also improved the solvability. There's a few tricks to it though, that you really need to figure out to solve the puzzles properly. Because of this size isn't always an indicator of difficulty, which the test solving for these puzzles showed.

Rules:
Divide the grid into regions of sizes 2, 3, 4 or 5 cells. No two regions can be the same shape; rotations and reflections are considered the same shape. Some borders are already given. Arrows on these borders always point to the larger of the two regions. 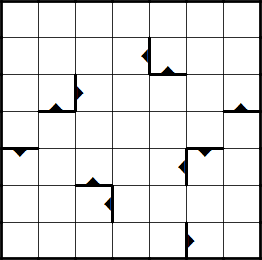 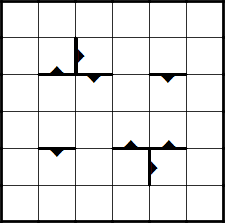 This is the one word puzzle that came through the testing properly. It's not very challenging. I always like to solve these puzzle though, which is a rarety for word puzzle for me.

Rules:
Put all given words into the two grids, so that they can be read left to right or top to bottom. Each area should contain 1 letter. Both grids and all words form a single puzzle.

I was really happy with how this puzzle turned out. I think it's one of the nicer Fillominos I have made.

Rules:
Divide the grid into different regions along the gridlines. No two regions of the same size can touch eachother by a side. Numbers in the grid indicate that this cell is part of a region of that size. A region can contain more than one given number. 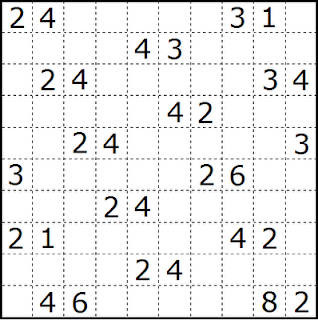 This was the first time I attempted to construct one of these puzzles. the first time I tried to make it 7x7, except I kept running into the problem of the puzzle no longer having a solution. So I figured an 8x8 puzzle would give a bit more freedom. While constructing I noticed there were a bunch of logic deductions in this genre that I hadn't appreciated before. 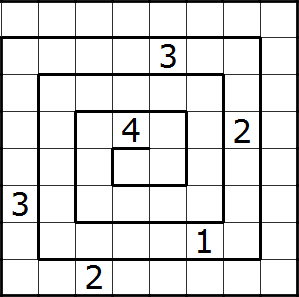 This is another of my favourite constructions. I am really happy with how the big empty middle area resolved itself.

Rules:
Colour some cells to create a single contiguous shape. The shape can't have any 2 by 2 coloured areas. The clues in the grid tell you how many consecutive cells around it have to be coloured. If there's more than one digit in a cell, the groups of cells have to be seperated by at least one empty cell. Cells with clues remain empty. 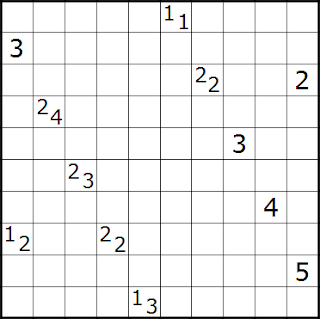 This is a genre I just love playing around with. It also seemed the easiest Tapa variation to employ a 24 theme on as you have 2 types of clues to use. It's one of the more challenging puzzles in the set.

Rules:
Colour some 2x1 rectangles to form a single contiguous shape. The shape can't have any 2 by 2 coloured areas. The clues in the grid tell you how many consecutive cells around it have to be coloured. If there's more than one digit in a cell, the groups of cells have to be seperated by at least one empty cell. Empty rectangles are magnetic plates. Each magnetic plate has a positive (+) and negative (-) pole. Poles with the same symbol can't be orthogonally adjacent. The numbers outside the grid indicate how many of the indicated symbol appears in that row or column. 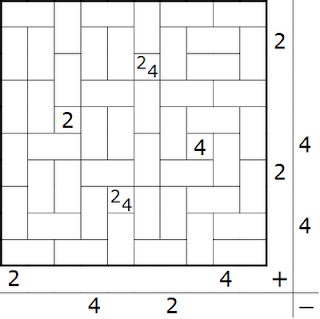 I didn't come up with this puzzle type myself. I remember seeing something similar before. I think it was in a Diogen competition, but I'm not sure. The difference is that in that puzzle there were also numeral clues, which I took out as I didn't feel they were necessary. 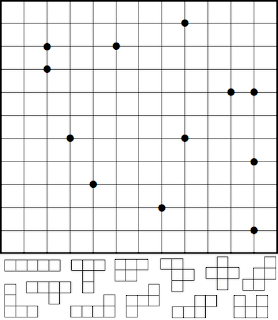 It's not surprising that my puzzle set contains at least one type by Naoki Inaba. This type may seem familiar to people as the Tapa Compass variant was based off it, which featured in TVC XII. The puzzle worked out well.

Rules:
Colour some squares so that all remaining white squares form a single contiguous polyomino. Black squares can't touch eachother by a side. There can't be any 2x2 area of white cells anywhere. Squares with arrows or stars can't be coloured. Arrows indicate that this direction is the only way you can travel to the star over the white cells without backtracking. 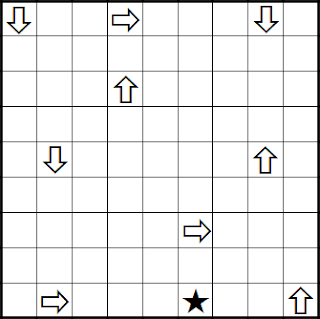 I took this variant from the orange Mensa puzzle book by Dave Tuller and Michael Rios. I felt there should be a Battleship puzzle in the set and tried to work with a few variants as I thought that would be more interesting. I themed it around the number 24 as the clues come in pairs that multiply to 24. It was almost rotationally symmetric, except I had to concede 2 clues to be one cell off. The puzzle worked out really nicely in my opinion.

Rules:
Place the given fleet in the grid so that no two ships touch eachother, not even diagonally. Numbers in the grid indicate the total amount of empty cells that can be seen from that cell till it sees a ship or border in all four directions, not counting the cell itself. Ships can't be placed on cells with numbers. 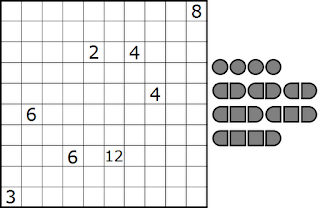 This Myopia puzzle is pretty challenging. For a 10x10 puzzle it has relatively few clues, especially when comparing to other puzzles I've made. It is nicely solvable by logic and uses different techniques that don't always show up in this puzzle type.

Rules:
Draw a single closed loop across the grid lines. Lines in the grid indicate in which of the four directions the loop is closest when looking from that square. 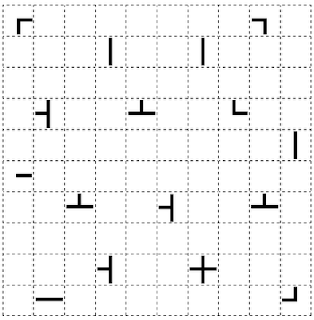 This is another Naoki Inaba type I hadn't made before. It has simple rules but they're still interesting and bring something new. The puzzle is pretty challenging for a first time solve, which is why it has a pretty high score.

Rules:
Draw two closed loops by connecting centers of cells horizontally and vertically. The loops can't touch or cross themselves or eachother in any white cell. Each white square is visited by one of the two loops. Cells with circles are either visited by both loops or neither of the loops. When the loops go through a square with a white circle they always go straight. 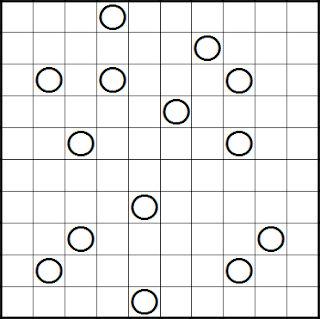 This was the only type I remade to be included in the set as I wanted a Paint-by variant in the set and this is currently my favourite to construct. It is a bit trickier than my first puzzle but a lot simpler than the reject. I think it's fun variant. 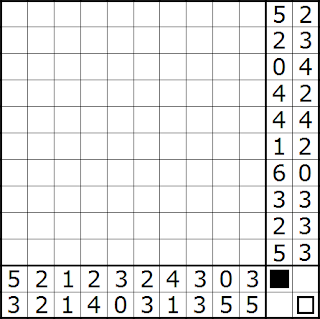 This is a simple variant on the Maxi Loop genre. All 2's and 4's being given really suits this puzzle type. I think it's a good way to use the Maxi Loop genre. Because of this variation it's the hardest Loop puzzle in the set. With all clues given it wouldn't be half as hard. I originally panned on using a 12x12 grid, but as the 2 and 4 region occupied exactly 20 cells, it was better to put it in a 10x10 grid as the remainder could all be divided in pentomino regions.

Rules:
Draw a single closed loop that travels horizontally and vertically through all cells once. The loop doesn't touch or cross itself. The grid is partitioned in a number of blackbordered regions. A number in a region indicates the highest amount of cells the loop travels through consecutively in that region. All 2 and 4 clues are given. 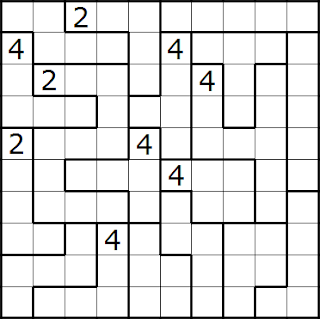 This Killer Sudoku has a similar theming as my Countdown Killer Sudoku I made last year, where all cages has the same sum. This 24 puzzle was actually much easier to construct than the 10 puzzle. Because 24 allowed for larger regions there was a bit more freedom in choosing cages.

Rules:
Place the digits 1~9 once in every row, column and blackbordered 3x3 area. In the grid some dashed cages are given. Number in these cages indicate the sum of the digits in those cages. Digits can't repeat within dashed cages. 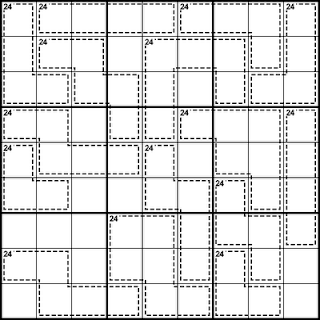 I had started making these puzzles for one to be included in my 24 hour puzzle set. As I had made a few nice ones, I decided to also post one on my blog. This is the easier of the two, which I felt would be more suited for the championship. It's still a challenging puzzle, mainly because the missing 1-9 in every row/column rule slows people down.

Rules:
Place a digit from 1~9 in every cell, so that no digit is repeated in any of the three directions. When a dot is given between three cells, the digits of 2 of the cells add to the digit in the third cell. Not all dots are given. 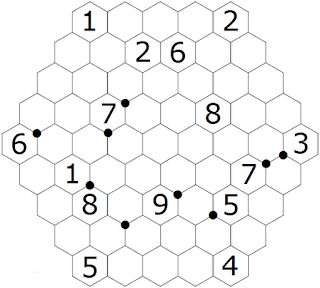