It's been a while since I've posted. This is mainly just through lack of inspiration on my part. I hadn't written any puzzles for the last month or so.  I recently wrote a bunch again and that went off pretty well, so I'm going to start posting puzzles again.

If you like Sudokus, this weekend can be an enjoyable one for you. With 2 Sudoku tests running, there is plenty to solve. Firstly there's the 8x8 Sudoku Contest on Logic Master India. This competition has 2 seperately solvable parts to it. Both parts have a variety of different 8x8 sudokus in it. One part with regular 2x4 nonets. In the second part the puzzles all have an abnormal layout, either irregular cages, or differently placed 2x4 cages.
There's also the Swiss Sudoku Championship hosted on Logic Masters Deutschland. This is a collection of mostly well known variants. It has a halved squares sudoku in it, which featured in its own round at the WSC in Hungary last year.

This Sudoku will feature in the LMI test. It's an interesting genre, which has some overlap with my own Frameless Sudoku. This idea though needs far fewer clues to get unique though. I am not sure if the puzzle in the championship will also look like this, but I think it's nicer by leaving clues out.

Fill in the whole grid with numbers 1-8 so that each number appears exactly once in every row, column and blackbordered area. Numbers outside the grid indicate the sum of first X-numbers in corresponding direction. Number X is always the first number in corresponding direction. F.E. - if the first number in row is 5, the outside number indicates the sum of first 5 numbers in that row. 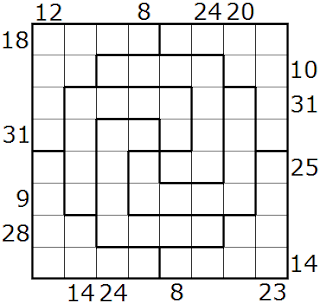