Yesterday's puzzle was scrapped at the last moment. the puzzle was not unique as I had made a flaw in the opening, so the whole puzzle didn't work anymore. There was really no saving it. I didn't want to just make a quick puzzle and instead moved the posting up a day.

This weekend I won my first LMI monthly puzzle test. I hadn't expected it when I finished it, with how disappointing the last 40 minutes went. In the first 80 minutes I had brushed off all puzzles besides the two "no numbers" genres. I thought it would be best to try to solve both No Number Field puzzles and leave the easy loop for the end. But after really struggling through that easy one, I quickly switched to the loop. The easy one I liked, although I struggled with it a little. I managed about half the second No Numbers Loop in the last 10 minutes. I made a mistake and it took me over 10 tries afterwards to discover what I was doing wrong.
Through Saturday it became clear though that I wasn't the only one who struggled with a few of the puzzles. In the end the top mostly solved the same puzzles, with the big difference being that I did manage to solve the second Synchronised Maze.

Today's puzzle is very old school to me. It was a standard puzzle in Breinbrekers when I first started buying the magazine. It has some similarities to Tents and Trees. The name of the puzzle was "Huisje, Boompje, Beestje" which is a Dutch saying that literally translates to "little House, little Tree, little Animal". The puzzle layout featured a house, a tree and a heart. Because the saying doesn't really translate to English in a way that it's applicable to a puzzle type, I changed the idea a bit. Instead it's represented by a camping ground.
When I first got the magazine this puzzle type always broke me up. I hardly ever managed to solve the puzzles. Then when I first started making puzzles, I tried making one of these. And all of the sudden I was able to solve them. It was the first time I noticed that trying to design a puzzle helps with solving a puzzle type.
There are 2 puzzles. One is a small easy one to help learn a few of the tricks involved. The second one is a normal sized puzzle. It's harder, but completely logically solvable. Hope you guys enjoy them. 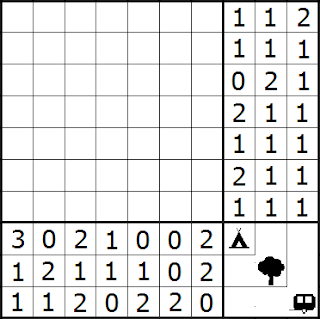