This puzzle was inspired by a question raised on a sudoku forum if the Sunday Telegraph's Killer Sudoku With Hidden Cages was also solvable without the constraint that the number was always in the top left cell of the cage. It was never succesfully answered as those killers are probably meant to be solved that way. The Top Left cell constraint is a very powerful one, so it would probably not be unique. From here I figured it might be interesting to try to design a puzzle without that constraint. I'm guessing it's been done before, but I can't directly recall any of them.
I really like how the puzzle turned out. It looks nice and solves really smoothly. The opening probably isn't the most obvious one though. I don't think it's overly hard, but most of my Sudokus turn out a bit on the harder side. I think it's just something that automatically happens when I create Sudoku variants as I like to exploit and explore the opportunities a variant offers. Hope you all enjoy it.

In this Killer Sudoku the cages are hidden. Each cell with a clue number is part of a seperate cage. Each cage consists of orthogonally connected cells. The number indicates the sum of the digits in those cells. No digit can repeat within a cage. Cages consist of at least 2 cells. No two cages can overlap. 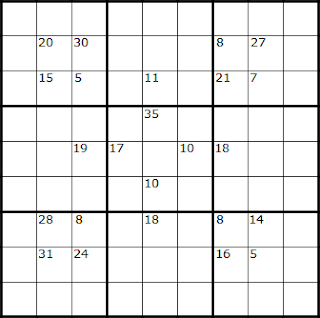