With this puzzle it is back to old school puzzling for me. Easy as ABC puzzles are one of the first puzzle types I solved. They used to appear as an extra puzzle in Logiquiz magazine. These were my real introduction to logic puzzling. This was before I started buying Breinbrekers. They appeared under the name Letterraam, which is a name for an old tool to help kids learn to read in Dutch. Without these puzzles I would have probably never bought Breinbrekers.
These puzzles uses two common variations on the genre. Firstly they don't use the standard "first seen" clues, but indicate the position of the letter when looking from that side. So A3 means that A is the third letter when looking from that side. This variation makes constructing larger grids much easier as large grids tend to get uniqueness problems in the centre, where your clues don't have any effect. Secondly they have regions that function just like a Sudoku. This helps reduce the number of clues necessary to make it unique.

Rules for Easy as ABC

Fill the letters A~E (A~G in the larger puzzle) once in every row, column and black bordered region. Otherwise follow Easy as ABC rules. 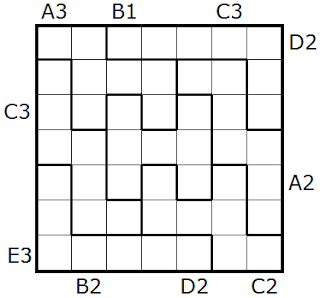