I have played around with this idea a bit already before. When it popped up in the US Sudoku Qualifiers under the name Sudoku stairscases, I figured I'd give it another go. I prefer Expanded Sudoku as Sudoku Staircases really only work for one layout. I made the first ones back in early 2010. There'd been other Sudokus with gaps in rows, but I hadn't seen them with the standard 3x3 blocks. My first puzzles are puzzle #1695 and #1703 on PuzzlePicnic. Later on I tried to make them with irregular cages too, namely puzzle #2584 and #2607. The logic in them isn't any harder than any normal Sudoku, but I still think the increased size adds a bit of an extra challenge.
This puzzle isn't any harder than the other puzzle. I like how it looks though. This puzzle has one more challenging step that stayed in the puzzle while maintaining uniqueness.

In this puzzle the rows and columns continue over empty space. 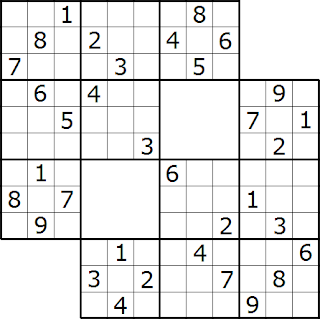