At the request of Zoltan Horvath I contributed some puzzles to the Hungarian Puzzle Championship held this weekend. I will post all puzzles this week. The general requirements were 2-4 puzzles for a solving time of 10-15 minutes. The test consisted of a classics and non-clasics round. Today we start with Kakuro, which was featured in the classics round.
I've always liked writing Kakuro puzzles, but I generally tend to write difficult puzzles. So my first goal was to write 2 easy puzzles with all basic deductions, with openings in multiple places. It took me a while to get that done actually as I automatically tend to put in harder things without thinking about it. I made 2 easy puzzles which turned out well. In hindsight it would have probably been better to make them a bit smaller to make the solving time less. But I figured they'd both fall between 1-3 minutes in solving time for the fastest solvers. The first one was just a simple circular pattern you can almost go in on big haul around the track. The second puzzle was a bit more open pattern, with a few more places where the puzzle can open up. I had the first one tested to see if this was actually enough on the easy path, as I find it hard to actually judge difficulty of Kakuros and it seemed to be okay.
The third puzzle I wrote had a few harder deductions, but the main thing that made it harder is that is has a single opening from which you have to work through the puzzle. It turned out to really not be anything special. It was one of those puzzles I have written many of.
The fourth puzzle I wrote is actually one of my favourite Kakuros I have written ever. It was built around a pattern which employed eight interlocked 8-cell sums. I made them all a different value. Because of the many  larger sums it uses certain techniques which you don't normally encounter much in Kakuro puzzles. It has some similarities in layout and solving to another puzzle I have written before. I think this one turned out better.
During testing of course it again turned out that my judging of Kakuro difficulty was far off the norm and instead of four puzzles, only two of the puzzles were used. Only the second and third puzzle ended up in the championship but I'm still posting all four puzzles in this post. 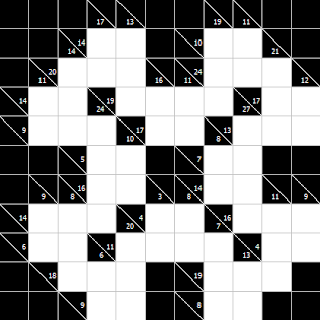 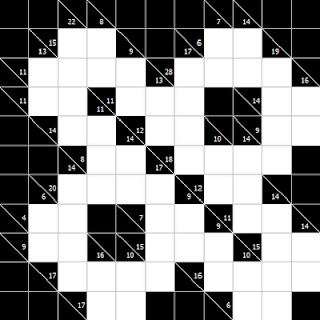 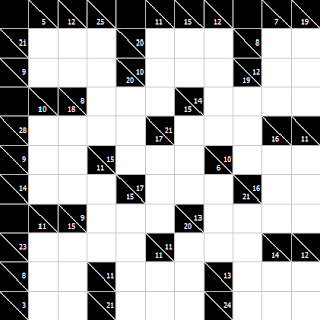 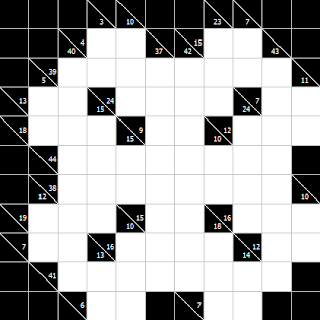