The reason there are two puzzles today is because I started designing the Not Alone Masyu and noticed that the same placement actually also makes a nice opening for a No Touch Masyu. So after completing the Not Alone Masyu I also used the opening to make a No Touch Masyu.
The Not Alone variation is based on the Not Alone genre. It uses similar logic as the alternating Masyu variation, where the loop has to alternate between black and white circles. In this type the loop isn't allowed to alternate between white and black circles. In other words, every circle is preceded or followed by at least one circle of the same colour. I think it works nicely in this puzzle and decreases the amount of circles necessary.
The No Touch variant was seen first on Palmer Mebane's blog. It has seen some appearance in other people's blogs and the Indian Puzzle Championship as well. It was mere coincidence that I spotted that the opening worked just as nicely for this variant. I couldn't just let it go and worked with the same opening to create a second puzzle. I think it worked out well.

Not Alone Masyu:
Follow regular Masyu rules. Additionally the loop may never alternate between black and white circles. In other words, every circle is preceded or followed by at least one circle of the same colour. 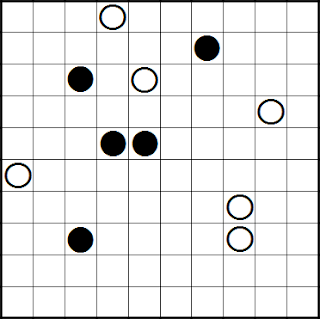 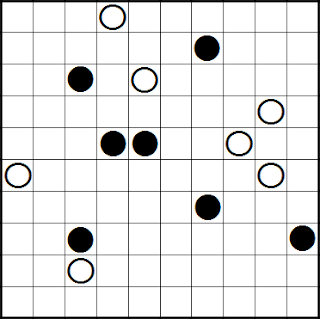