The original idea for this round came from the 2003 WPC in Arnhem. I have made a round like this before for another online competition. I used similar relays in that round as well. As that round wasn't done on time, I wasn't sure how many of these relays would work on time. Some relays are good without time, but things like copying the shapes of a Fillomino solution are very annoying in my mind for a speed contest.
The first puzzles I wrote were the Snake and Nurikabe puzzles, as I had used the Snake to Nurikabe relay before and liked it. I wrote a Snake puzzle with few clues, so that I could easily write a puzzle that had these clues inside the grid, which could then be transferred to the side. I then opted writing a Kakuro puzzle as the opening puzzle, as most solvers are familiar with that. With this the first 3 puzzles were all types that most people in the puzzling community have done multiple of. The next part of the design was getting from Nurikabe somehow back to number clues. I then found the combination Yin Yang/Hiroimono, which I thought was a nice transition, with a few less familiar puzzles. I did have to figure out how to properly write Hiroimono puzzles without any given clues as I had never done that before. From here I opted to write a Doppelblock puzzle. It was easiest to write this puzzle without any repeating clues as this would make the relay the smoothest. It was a bit hard to get it right, as some clues are just more conductive in this puzzle type. I was planning on writing a Minesweeper puzzle next, and figured I could easily relay it to any puzzle type. That's why I chose to write a Magnets next, which could transfer to a Battleships puzzle. I wrote a Magnets puzzle with missing clues, which I have written many of. I chose a smaller size as they are generally viewed as hard to many people. I had to make sure the remaining clues were under 20 as that's the max number of ship segments a standard Battleships puzzle has. It worked out perfectly and the Battleships construction was really easy to finish. When I went back, I couldn't get the Minesweeper in a way that the relay to it and from it was nice. That's why I tried a number of other puzzle types. Then I tried Country Road, which caused an odd design experience. I tried to write them normally, except I couldn't get it so it would transfer to the already written Magnets puzzle, so that's why I changed it around. I first marked a bunch of empty squares so that it would transfer properly to the Magnets puzzle, and then reversely engineered the regions so a solvable valid puzzle would exist which has those empty squares in those places. I think the result is nice and I doubt anyone would expect it was designed that way from the solve. I thought 9 puzzles would be enough, even though I had originally planned on making 10 puzzles. I just think some of the relays would take more time than others, so I thought this would make a long enough round for the championship.

The puzzles can be found below. 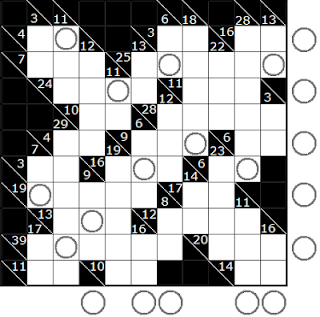 Draw a one cell wide snake in the grid that doesn't touch itself, not even diagonally. Clues outside the grid indicate how many cells are used by the snake in that row or column. The head and tail of the snake are given. 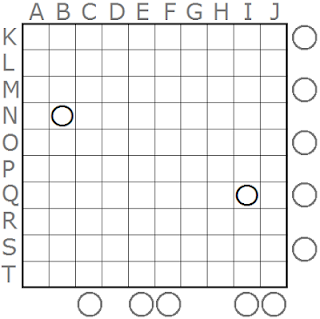 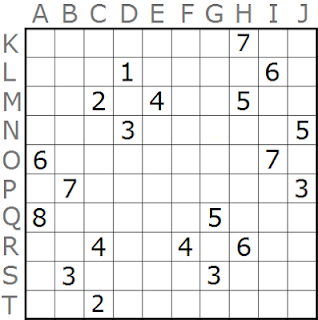 Relay:
Colour all circles black in the Yin Yang puzzle that would be covered by the stream of the Nurikabe puzzle. Solve the remaining Yin Yang puzzle. 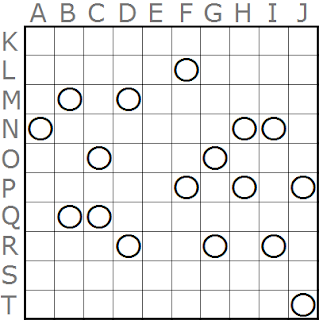 Relay:
Place a circle in every white cell that would contain a white circle in the solution of the Yin Yang puzzle. Solve the resulting Hiroimono puzzle.

Rules:
Find a path passing all white stones going horizontally and vertically. Number all stones in the order you pass them starting with 1. Whenever you reach a stone you pick it up and travel horizontally or vertically to the first stone seen in that direction and again pick it up. You're not allowed to go back in the direction you came from when reaching the stone. 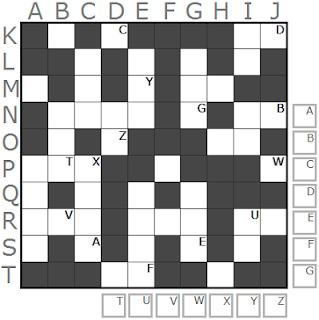 Relay:
Transfer the number of every letter to their corresponding position next to the grid. No number above 15 can be transferred as those can't be valid Doppelblock clues. Transfer the digits in the same square in the Doppelblock puzzle and solve the resulting puzzle. 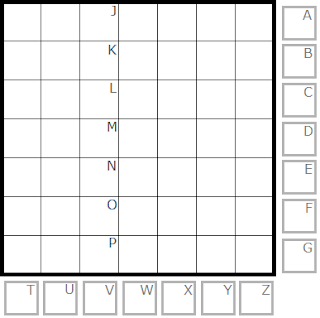 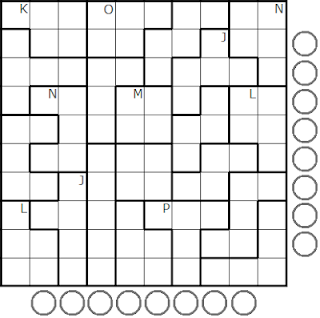 Relay:
Count the number of unused squares for each marked row and column. Transfer these digits in the same order in the marked grey squares in the Magnets puzzle. Solve the remaining Magnets puzzle. 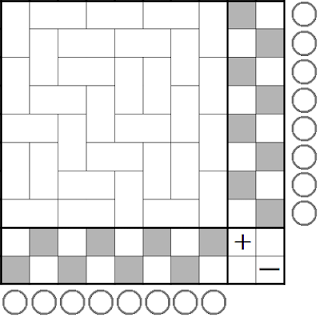 Rules:
Place the given fleet in the grid, so that no two ships touch eachother, not even diagonally. Numbers on the outside indicate how many ship segments are in that row or column. Some ship segments are already given and empty squares are marked.