The 9 was one of the tougher numbers to get a good genre for. I experimented with a few other genres, but many didn't work out. Some others worked better with other numbers, and I used those instead. Eventually I settled on a Sudoku as that seemed to work well with the number 7 last year. I used two 9 clues and part of the thermometers together form two 9's, so I think I put enough of the number in it, to warrant it a place in this countdown.
I think the puzzle turned out well. Not too hard, but some nice steps in there none-the-less.

In this Sudoku, along a thermometer digits are always increasing, starting from the circle. 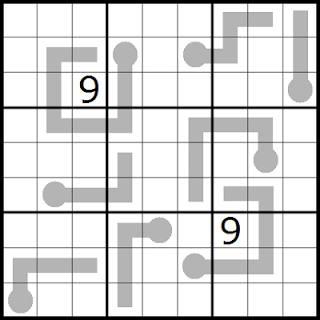