This is one of the new types to my blog in this set. I hadn't made any of these puzzles before this one. Again my first choice of digit worked out. I had seen Prasanna Seshadri make some good use of the number 4 in one of his puzzles, so figured this number might work. Took a while to get it right though as the number didn't let itself be unique that easily. It's the number which has the most possible configurations in this genre. It took a while to get the end right, but I thought the opening was really solid, so I wasn't going to give up on the opening and eventually i found a nice way to get it unique.
It's easy/medium difficulty. The opening is fairly standard, but it has a few trickier steps in the middle. Just for the fun of it, count the length of the loop in the end. It's purely coincidental, but I thought it was funny none-the-less.

Draw a single closed  one-cell wide loop, that doesn't touch itself, not even diagonally. The loop doesn't go through clue cells. The clues indicate how many of the 8 cells around it are used by the loop 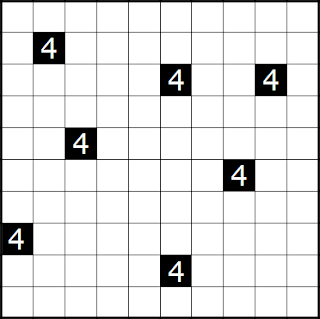