I went on the hunt for some puzzle genres I had never done for this set. One of the places this regularly leads me is of course Naoki Inaba's site. There seem to have been a few changes to his site. You can now copy all Japanese characters and some of the puzzle types have English translations added to it from the Naoki-Projekt on Logic Masters Deutschland. When I saw this type, I figured it could be a good genre to use the number 2 on. It took a while to get it unique. The opening is a bit standard, but in the end it gets a bit trickier, but there was no better way to force it unique. The name of the genre comes from google translate. It translated the puzzle name as "Santoitchi" but suggested I might mean the Japanese for Sandwich. It might have an alternative meaning but I got persuaded to just name it Sandwich. I have no real clue why it would called this though and I guess I could just stick with Santoitchi, as many Japanese puzzle types keep their original Japanese name.
The puzzle is medium/hard difficulty. There's a logic path to the end, but for a new genre it might be a bit trickier. It might help to try some of Naoki's at first.

Colour some cells black, so that the remaining area can be split up into triminoes. No two black cells can share an edge. Each trimino must contain a number. A number indicates how many black cells share an edge with that trimino. 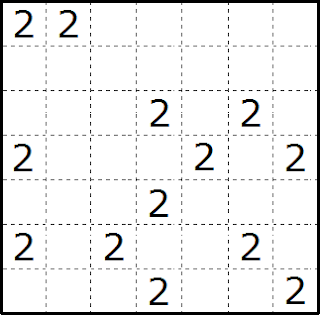