As you might have noticed, this set contains far more new genres than my first set. I just wanted to avoid repeats of previous genres as much as possible. So I went on a long look through websites, looking for genres that might work with some of the numbers. From Palmer Mebane comes the puzzle type International Borders. During his LMI test, Puzzle Zoo, was the first time I came across it. I solved both of these puzzles during competition. I was hoping this genre would lend itself for a single digit puzzle, as it was different from most puzzle types. I first tried the number 0, but didn't like anything that came out of it, so I changed to the number 1. I found a simple opening and some interesting steps with only using 1's. I had to give in a bit to get it unique though. This isn't the best puzzle in the set, but I think it's still enjoyable. I might try this another time with more numbers, because it was pretty fun to try and design one of these.
It's probably and easy/medium puzzle. It might just take a while to get used to the genre.

Colour some squares without circles black, so that the grid is split into 2 seperate orthogonally connected areas. Circles of the same colour should be part of the same area, different colours should belong to different areas. Grey circles can be part of either area. Numbers in the grid indicate how many of the four orthogonally adjacent cells have to be coloured black. All black cells should share a border with both areas. 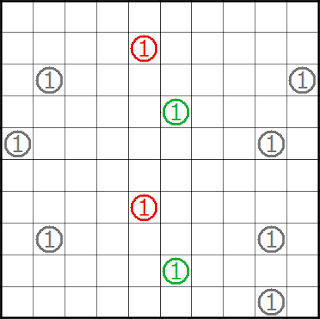