This week was Valentine's Day, which has influenced a lot of puzzles this week.
My Sudoku is inspired by the abbreviation for Valentine's Day, which seems to be used more often these days, namely V-Day. That's why my Sudoku is themed around the number 5 or V in Roman numerals. It's basically a simple variation of XV Sudoku, except I changed the X pairing of a sum of 10 to a pairing of a difference of 5. The only real difference in the solve is that you don't know whether a mark is a sum of 5 or a difference of 5. As a further theme, the givens spell out the date of Valentine's day: 14-2. For Americans who feel the date is written wrong, you could rotate the grid 180 degrees and spell out 2-14 in the same squares that are filled now and still solve it in the same way. The switching of the places for 1 and 4 doesn't matter and keeps the puzzle unique, but the solution does change a bit.
The puzzle is moderately difficult. Not too difficult, but you have to remember well that all hearts are given.

Everywhere two adjacent digits have a sum or a difference of 5 a heart is given. 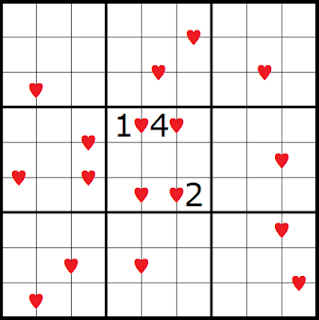