This puzzle is as preperation for my next Daily League Sudoku. I was a bit afraid part of the logic might trick up some people, so I figured I'd make something nice to practise it with. I think the puzzle turned out really nicely, with the asymmetric clues. It should be fun to solve, even though the logic might be a bit repetitive.

Place 5 black circles and 4 white circles in every row, column and marked 3x3 area. Everywhere 2 black and 2 white circles form a 2x2 checkerboard pattern a Battenburg marking is given. Some circles are already placed. 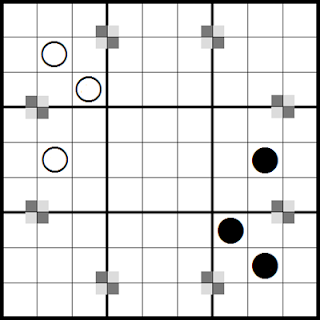