This is my fifth Sudoku for the Daily Sudoku League. The last week so far has featured a Counting on Line Sudoku by Seungjae Kwak, an Equal Sudoku by Christoph Seeliger, a Between 1and 9 Sudoku by Prasanna Seshadri, a Fortress Sudoku by Bastien Vial-Jaime, a Little Killer by Rishi Puri and an Odd Sudoku by Tom Collyer.
This week I've gone for a simpler and more familiar variant. Scattered Sudoku is just a Jigsaw Sudoku with one non-contiguous region. The puzzle has only 17 clues, which is what I like about Jigsaw Sudokus. I like to get the amount of clues down to 20 or less, which is something I wouldn't get done in Classic Sudokus. The solve gets a bit trickier towards the end, but nothing overly difficult. It's in my opinion easier than the last two Sudokus I have posted. Hope you all enjoy them


This Sudoku has one non-contiguous 9 cell region, marked by the grey cells. 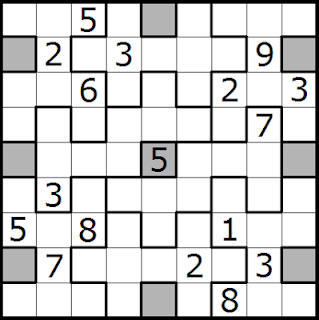