As I've mentioned before, each year I make a special puzzle for my girlfriend for our anniversary. Earlier examples include my Quattro Stagione and LITS Cube puzzles. This year I went for a big Tapa puzzle. It's her favourite puzzle type, so I thought I'd have a go at it. It was an ambitious project that didn't go without its problems. The first draft ended up having about 8 errors in various places. I eventually removed all but one when I had it tested, which brought about one last bad deduction on my part, which I had missed. Eventually I got it fixed and this is the result. My girlfriend is currently still working on it, but she gave permission to share it with you today.
I've made it available as a PDF through Google docs. This is because I'd advice printing it and I scaled it down in the pdf so it prints easily. It also includes all rules and the layout, to make the solving easier. It's a challenging puzzle and I think it helps being able to visualise the whole puzzle.

Below will be the same information as in the PDF, for anyone preferring to solve it on the computer. This includes a full size image. If there are any questions about the rules, please feel free to ask.

The puzzle is built up of 12 different regions. Each region is a different Tapa variant. Together they form a single puzzle. All grids obey standard Tapa rules and there is a single Tapa wall through the whole grid. Within each region the wall doesn't have to be connected, as long as in the whole grid a single Tapa wall is formed. Clue cells can count outside their own region according to the rule of the region the clue is located in.

Below you can see the grid layout on which grid obeys which rule. 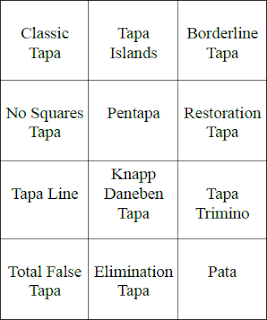 The rules for each grid are explained below. For examples you can check the Tapa Variations List
by Serkan Yurekli. Each puzzle rule is accompanied by a number in brackets which matches the number in this list.

Classic Tapa (0)
Paint some cells black to create a continuous wall. Number/s in a cell indicate the length of black cell blocks in its neighbouring cells. If there is more than one number in a cell, there must be at least one white cell between the black cell blocks. Painted cells cannot form a 2x2 square or larger. There are no wall segments on cells containing numbers.

Tapa Islands (28)
Follow Classic Tapa rules. Additionally white cells form separate areas surrounded by the wall. If there is a clue cell in an area, at least one digit should give the size of that area in unit squares. These unpainted areas can cross in other regions.