This addendum is being posted because of 2 reasons. One is to also post a Digital Tapa puzzle. Secondly because of a correction for the Tapa Guard puzzle. I jumped the gun on that variant and assumed that undivided cells could also contain multi-digit clues. Serkan rectified that this wouldn't be the case. I think it's more interesting for the genre to not have any divided clues, but maybe that's just my opinion. I think it would be nice to come back that way in another TVC.

The Digital Tapa puzzle isn't the most interesting, but it turned out okay. Last night's draft turned out non-unique as I had forgotten that 0 could be presented as a single digit clue. Some of the digits don't actually need a segment given, but I didn't want to do something that might not happen in the test. The layout is a bit dodgy with me doing it in paint.
Tapa Guard is now presented the way it would in the test. It makes the puzzle a bit easier, Especially the 1-5 clue, which I was really happy about working out.

Follow regular Tapa rules. Each Tapa clue is represented in digital form, as shown below. However, some segments may be missing from the original numbers. There cannot be a 0 in a multidigit clue.

Tapa clues have 2 functions:
1 - They function as normal Tapa clues.
2 - They indicate how many coloured cells can be seen in the corresponding directions. A digit in an undivided cell, may observe in any of the four directions. 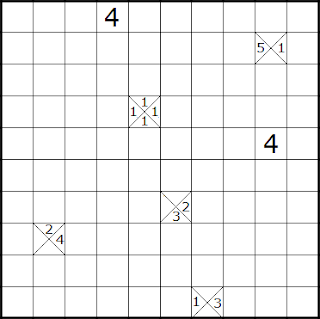