Here is the second part of the TVC X practise. I think the puzzles worked out well. If there's any variants you'd like to see one more of, I can try to give it a go. I am excluding the Tapa Distiller from this request as it's a bit too much trouble to make. I'd love to know what you think of the puzzles as that will help me in preparing these sets.

The Shortest Segment Tapa worked out well. I made another one, but that doesn't match the rules that will be used in the actual test. I will post that puzzle with the TVC recap after the test.
There are two Magnetic Tapa puzzles. One is a puzzle that matches the instruction booklet. I don't find it very interesting this way as the Magnets influence is very little here. The numbers outside are more needed to get the magnets unique and not the Tapa unique. This means they are mostly inconsequential for the answer key. The second one is a puzzle that uses the magnet clues to shape the Tapa. I really like this puzzle. It's a challenging one. It could be that the actual test puzzles will fall in between these two puzzles. At least you'll have gotten practise in both ways.
The Tapa Distiller is 7x7 because 10x10 seemed a bit overkill. I find these puzzles always tricky as you have to be careful with your deductions. Accidentally eliminate a clue from a correct grid and you'll have no clue where you went wrong. The reasoning to assign clues to grids isn't too hard for this one.
Anglers Tapa is a genre that isn't too bad but I think can improve a bit. I think all anglers being of unknown length might be better or possibly the anglers being in the grid hidden as Tapa clues (so a 15 could be a length 15 angler or a 1-5 Tapa clue). This one I made according to the example. I think it turned out nicely and uses the Tapa more for the opening than the Anglers bit.
Tapa Difference is an okay puzzle. I think it runs nicely. It's not my favourite as many of the clues are known at the start and the Difference bit adds very little to them.

You can find the puzzle below


6. Shortest Segment Tapa
Follow regular Tapa rules. Additionally a number on the outside indicates that no segment shorter than this number appears. It could be that no segment is of that length as long as no segment appearing in that row or column is shorter than the given number. Each row and column with a number contains at least one segment of the wall.

Follow regular Tapa rules. The clues of four seperate puzzles have been posted in one grid. Distribute the clues over the four grids and solve the puzzles. Clue cells in seperate puzzles do not overlap. Each clue should appear in only one of the grids as it appears in the overlapped grid.

9. Anglers Tapa
Follow regular Tapa rules. Additionally the clues on the outside are anglers. Each number indicates the length of their line to a fish. The Tapa wall is made up completely of these lines and doesn't occupy any other cells. The fish count towards the length of the line and are part of the Tapa wall. 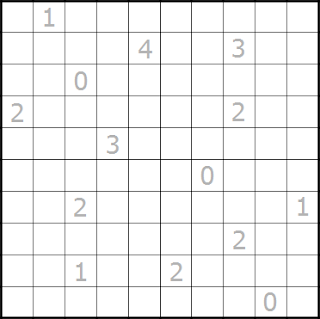