Good morning everyone. Here is the first "live" post from the WPC. The first round of the WPC will feature eight Domino puzzles. Except in the puzzles some of the numbers are missing. You'll have to restore them and fix the puzzle. It doesn't make a whole lot difference in the solving process, except that you have to watch out that you don't think a domino has only one place to go.
At the release of this post all WPC-participants should be bent over a booklet solving these puzzles if everything runs smoothly. This post contains only a single puzzle for you to solve. Enjoy! 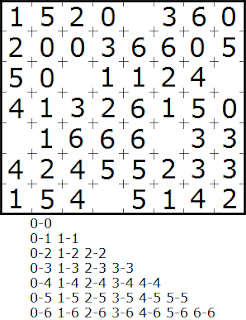