This round seems to be a dedication to previous championships. There's no actual explanation given, but it seems to be the fairest guess. You can see a bit of development in the type of puzzles over the years. From more observation and word types to the now more common logic types. I'm not exactly sure on why certain types were chosen.Types like Yajilin and Corral can't be that specific to a championship. A few of the ones from championships I've been to are easier to understand. The round will last 90 minutes for 20 puzzles, which is a pretty high average per puzzle.
I've only made 3 puzzles because many of the puzzle types I either don't really find interesting to construct or too hard to construct. The first puzzle I made is a Hiroimono. It's nothing new and many people will have come across it a few times. I'd just never tried it and wondered how it's done. I haven't really figured out how to best make them and I don't think it's too hard. At least I learned a bit about some of the tricks of the genre with it though. The Jumping Crossword I wanted to try to make for a while but I never find my results at all interesting. I don't really think this one is anything special either. I'm not sure how to make them turn out great but that's a general problem with word puzzles for me. The last one is a Tetrascope. I like polyomino genres, so I figured I'd give it a try. It's not really hard but then again I don't really think they can be.
Enjoy.

Rules:
Find a path passing all white stones. Number all stones in the order you pass them. Whenever you reach a stone you pick it up and travel horizontally or vertically to the first stone seen in that direction and again pick it up. You're not allowed to go back in the direction you came from when reaching the stone. Some stones are numbered. Rules:
Place all given words in the grid, horizontally or vertically. Letters in words don't have to be consecutive; some cells can remain empty. No two empty cells can touch by a side. Numbers in front of the word lists indicate the length of the word including empty cells. 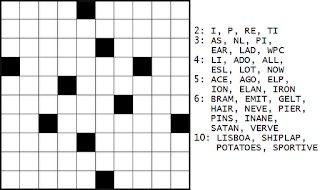 Rules:
Place all given tetrominos in the grid so they don't touch eachother anywhere, not even diagonally. Rotation is allowed, but reflection isn't. The numbers in the grid indicate the amount of squares around it are used by a tetromino. 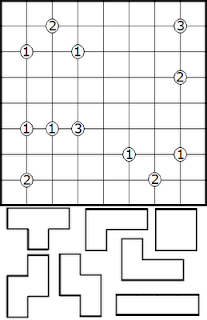