The second round we are facing consists of twenty-one puzzles around a twenty-one theme as it is the twenty-first World Puzzle Championship. This is one of the larger mixed rounds, lasting 2 hours, which generally means far too many puzzles for the amount of time. So, a lot of options to choose from and hopefully make the right choices in which puzzles to start with, getting all the big pointers done in the middle and finishing on some quick low pointers to get those last extra points in and not end up leaving 25 points out by just running 30 seconds short on solving the puzzle. Usually my timing and puzzle choices are pretty good. This was shown best at the 2010 WSC, where I managed to put the last digit in exactly when the timer ran out. I was sitting near the spectators, who could see me solving and got a congratulatory pat on the back for finishing so nicely within the time limit.
This post will feature five puzzles from the twenty-one genres featured in this round.

Rules:
Locate 12 passenger ships in the grid. Each ship is made up of a 1x3 rectangle. Ships can't touch eachother, not even diagonally. Each ship has a different amount of passenger ranging form 0-11. Numbers outside the grid indicate the sum of the passengers on the ships, which are located in that row or column.

Rules:
Colour 2 circles black. Then draw a single closed loop that goes horizontally and vertically passing through all circles. The loop can only turn in a circle. In a white circle it always makes a turn. In a black circle it always goes straight. There are exactly 21 circles between the 2 black circles. 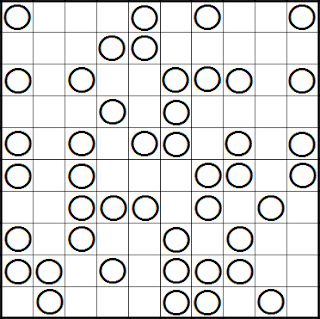 Rules:
Place a digit from 1~9 in every cell so that no digit repeats in any sequence of horizontally or vertically connected cells. The values on the outside are the result of the following operation: Multiply the first 2 digits and add the remaining digits (if available).

Rules:
Write a number from 1-10 in every row and column so no number is repeated in any row or column. Around the grid some arrows are given. For each arrows the sum on the digits in that direction add to 21. No digit can be repeated within any of these sums, even if the arrow is diagonal.