This round lasts one hour and features mostly new puzzle types. Most are small variations or hybrids on known puzzle types. It's hard to judge how this round will go. We will see in about an hour.
The puzzles I made an example of were Pipeline, which is a U-bähn variant, Russian Field, which is a simple division puzzle, Coded Tetramino, a tetramino division variant and Squares, a possibly annoying squares placement puzzle. I chose these ones, because I had some idea of what to put in these puzzles. Another possibly challenging one was Dominoes in the Water, but I had no real idea how this would look and thus how to construct an example.
The Pipeline puzzle is pretty simple once you get the basics. The Russian Field is relatively tricky as it features a silly trick. But the small size should compensate. The Coded Tetramino should be somewhat challenging. I employed one possible opening in the puzzle. Also the easiest to build in. The Squares puzzle is pretty easy. I am not that handy in constructing this type.
Have fun with them.

Rules:
Reconstruct a pipeline layout in the grid. The pipeline is built up of 3 different pieces. Some squares are left unused. Numbers outside the grid indicate how many of each piece is used and how many cells are left blank in each row and column. In the final pipeline layout there's a single path following the pipes entering the top left square and exiting the bottom right square. This path passes through all squares with a pipeline. The path isn't allowed to pass through a cell twice unless it crosses itself. 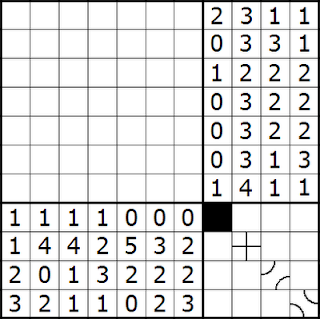 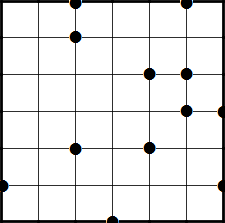 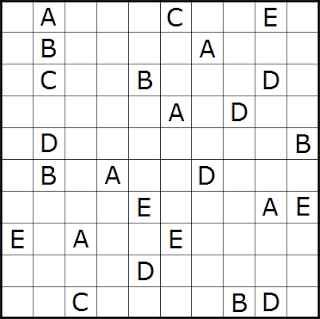 Rules:
Draw 6 squares of six squares of different size ranging form 1~6 along the grid lines. Squares can cross eachother but they are not allowed to share a side or corner, not even partially. Numbers in the grid the sum of side length of the squares that cover it. 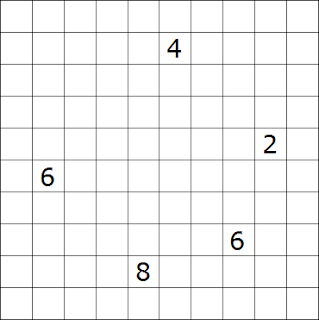