Here we start with the round of the first day that I expect is best suited for me. I never used to consider myself particularly strong in Easy as ABC puzzles, but the longer I've been solving online, the more I see that years of Breinbrekers practise has made me much stronger than I thought. I guess that's understandable, considering the amount of exposure I've had. The same goes for Nikoli subscribers with Nikoli genres.
This round won't feature any standard Easy as ABC puzzles though. There will be three Easy as ABC Crosswords, three Easy as ABC Snakes and three Hexagonal Easy as ABC puzzles in three different styles.
I will have an example of each of the three types. The Crossword is not difficult but pretty fun. The Snake I find the trickiest of the three genres and had some trouble constructing. The Hexagonal puzzle is my favourite of the three. Hexagonal Easy as ABC's always have far fewer clues than you'd expect. This is caused because the outside rows contain most the letters and thus there are far less solutions than a normal grid. I think these three puzzles should be fun.

Rules:
Place letters A, B or C in some cells, so no letter is repeated in any section of horizontally or vertically connected white squares. Each sequence of 3 or more cells should contain every letter once. Letters above or left of a sequence means this letter is seen first in that column or row.

Rules:
Draw a 35-cell long snake in the grid moving horizontally and vertically that doesn't touch itself anywhere, not even diagonally. The snake's head and tail are located in the grid as grey squares. Write the letters A, B and C in order on the snake's body [..-A-B-C-A-B-C-..]. The head and tail can contain any of those letters. Letters outside the grid indicate that this letter is located on the snake's part first seen from that direction. 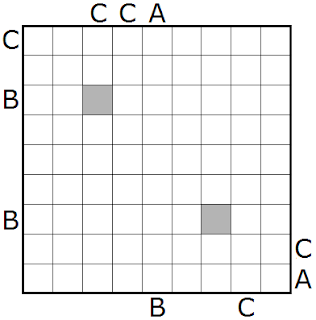 Rules:
Write letters A, B and C in some cells that they appear once in every row in all three directions. Letters outside the grid indicate the second letter seen in that direction.