World Puzzle Championship 2012: Round 11 Something Newish

The round name says it all. There's some new puzzles or variations. We have an hour to solve 9 puzzles. This leaves chances for bonuses.
My favourite are the Domino Arrows and Fishermen, although they both would be nicer by removing one of the clue types. I didn't do that in my puzzles though. I figured I'd stick as close to the instructions as possible.
The Domino Arrows puzzle is a challenging puzzle. This is partly caused by its size. The logic isn't overly difficult, but you have to understand some of the tricks. This can be hard as it's a new genre. The Fishermen puzzle isn't too hard. It's basically an Anglers puzzle, with size 2 fishermen. The third puzzle I made was a Rural Tourism. I mainly made that one to completely understand the rules. It has a complex rules set. But once you figure it out, the puzzle solves nicely, although a bit challenging.
There's one more puzzle to come later today. Enjoy.

Rules:
Place the given set of Dominos in the grid so that they don't touch eachother, not even diagonally. In the grid a number of arrows are given. Each arrow points at exactly three dominos. Each domino is pointed at by exactly one arrow. The numbers above and left of the grid indicate how many dominos are located in that row or column. Numbers below and right of the grid indicate the sum of the digits on the dominos in that row or column.
[Edit: The rules are slightly different from the WPC. I misread a rule]

Rules:
Place 2 farms(triangles), a well(circle) and a farmer(stick figure) in every blackbordered area and column. Farms aren't allowed to touch farms in other regions, not even diagonally. They are allowed to touch farms in the same region. Wells can't touch wells in other regions and farmers can't touch farmers in other regions. Each well should be orthogonally adjacent to at least one farm in its blackbordered area. Numbers on the right indicate the amount of farms in that row. Numbers on the left indicate the amount of  wells and farmers together in that row. 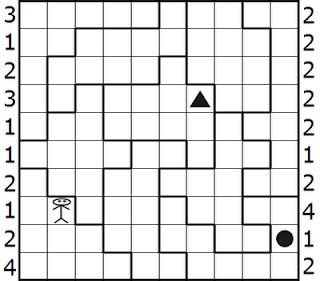 Place a number of 2x1 boats in the grid so that they don't touch eachother, not even diagonally. Each boat has to contain a fisherman indicated by the numbers. Draw a line from each fisherman so that each fisherman catches a different fish. The lines cannot cross itself, eachother or a boat. The numbers indicate the length of the line. Numbers outside the grid indicate the amount of cells covered by boats in that row or column. 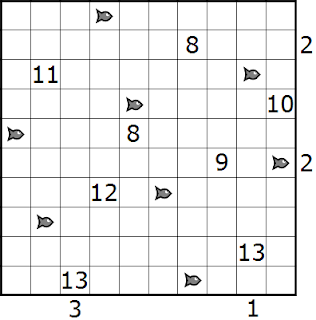