The first round this morning is based around, well, lines and arrows. Drawing loops, lines and placing and following arrows. It will bean hour long round with a considerable amount of puzzles. From the values of the puzzles, there don't seem to be any really hard puzzles. There's two higher scoring puzzles but other rounds have had far bigger values puzzles.
As practise puzzles I made an example of each of the types: one loop puzzle, one line puzzle, one arrow placing puzzle and one arrow following puzzle. For the Loop puzzle I chose one of the easy types: Looking for the Loop. It doesn't leave very much room for freedom as the clues are not very restricting. So to make it unique, you basically end up with an easy puzzle. For the Line puzzle I chose Pipes, which is basically an Anglers puzzle, except multiple fishermen can catch the same fish. It's not very challenging. I think they can become difficult in a larger size with higher numbers, just like with Anglers. The Arrow placement puzzle is Pointing at the Treasure. It's a twist on Marbles puzzles where you place marbles, so that each marble is pointed at by one arrow and each arrow points at one marble. Except now the Marbles are placed and you have to place the arrows. This is my favourite puzzle in this set of four. I really like how it worked out. Lastly there's an Arrow Maze puzzle, which is more often known as 1~36(or whatever the end number is). I think my puzzle is relatively tricky. I like the end result as it has very few given numbers and is far more path based than number based.
Hope this second day is as enjoyable as the first day.

7-2 Looking for the Loop

Rules:
Draw a single closed loop by connecting the centres of cells horizontally and vertically. The loop can't touch or cross itself. Numbers in the grid indicate how many of the 8 cells around it are used by the loop. 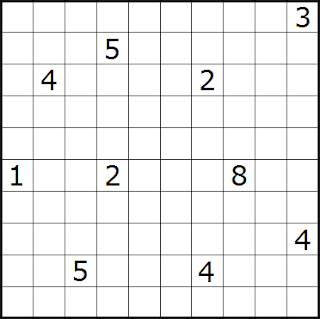 7-7 Pointing at the Treasure 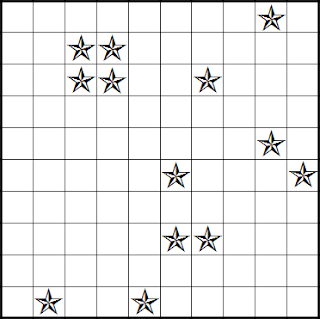 Rules:
Connect each number to one of the circles with a line going horizontally and vertically. Lines can't touch or cross eachother. All cells are used by one of the lines. Multiple lines can connect to a single circle. The numbers indicate the length of the line. 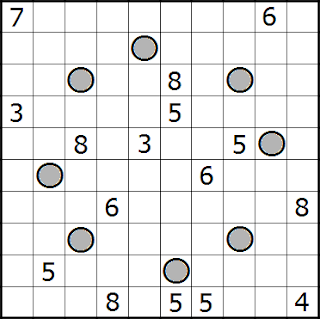 Rules:
Find a path through the maze by visiting every cell once. Start from the cell with number 1 and write numbers in order till you finish at number 36. You can jump from one cell to another in a horizontal or vertical direction, but only in the direction of the arrow. Some numbers have already been given. 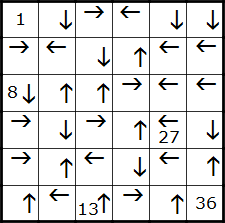