I've been intending to post some puzzles on my blog, but that never really seems to happen. I wrote a couple of Sudokus for the Daily League to post in the upcoming weeks. But as the Instruction Booklet of the WSC just came out, I've noticed some of the variants I wrote are useful as practice for the WSC. So I'll be uploading those puzzles earlier than planned. I will try to post a Sudoku and/or puzzle a day as practice for the WSC, but I could be missing a puzzle once in a while.

This first puzzle does not actually appear as a separate variant in the WSC, but the practice might be useful. I enjoyed the opening of this puzzle. The original design had a symmetric layout, but the extra clues somewhat invalidated the created opening, so I reduced the puzzle a bit to make the solve come through more. This is the third Palindrom Sudoku I've written and for some reason the centre of the sequence seems to always end up between R2C3 and R1C4. Clearly this seems like the right point to start a line for me. 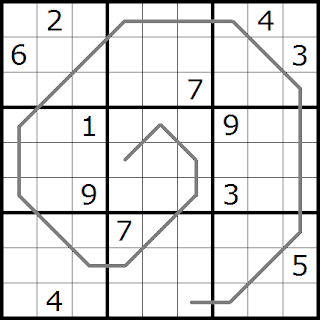