The Joker round is going to be a tricky one. I made an error in the construction of the previous Joker puzzle. Hopefully There are none in these. It's easier to make an error in these puzzles if you just fall back into your standard deductions.
This type actually appears twice in the championship as it also appears in the final team round.
The first puzzle should be a nice solve. I put in a few things that can be done with the Joker in this genre. I'm pretty sure they were easily figured out by yourself, but I think they're nice to see in a puzzle. There's still a few key deductions to find, but it should work well.
The second puzzle is much harder. It relies on a lot of clue interactions, without giving much direct information. It takes a long chain of interactions to place a few digits and consequently figure out the Joker. Even then it's not exactly easy.
I had to check a possible error. I realised I might have forgotten something, but it didn't really influence the puzzle as the deductions still held true. The dumb construction errors really don't allay my fears of making errors in this round by accidentally forgetting a Joker interaction.

In this Sudoku, numbers on the borders of two cells indicate the product of the digits in those 2 cells. Additionally, there is a Joker digit in the grid. This digit can take on any integer value from 1 to 9 necessary to comply with the rules. It can even take multiple different values within a single cell to satisfy different clues. 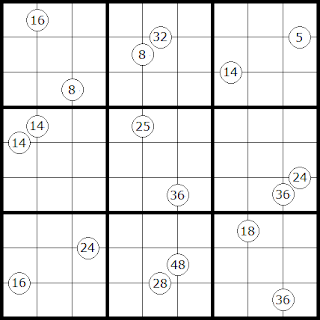 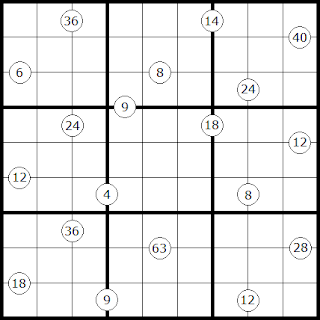