This is the first proper practice puzzle for the 2017 WSC.

I've written this type a couple of times, usually under the name Inside Sudoku. One of them was used at the 2016 Thai Open and another one can be found on my blog. The logic is pretty similar to Outside Sudoku, but the small twist makes it different enough to qualify as a different variant. Because it's a newer variant, I enjoy writing these a bit more.
This puzzle has a type of opening that works nicely in this variant. I think you need to fully understand the implications of the opening to get your way through the puzzle. It's not the easiest opening, but should be useful to understand the full implications of this variant. The solve around it shouldn't be overly hard. I sacrificed symmetry a bit to keep a nicer solve. I always prefer nice logic over nice aesthetics, although both together is obviously better.

In this Sudoku, clues are given on the outside. Digits on the outside indicate that these digits appear in the 2nd, 3rd or 4th cell in that row or column when looking from that side. 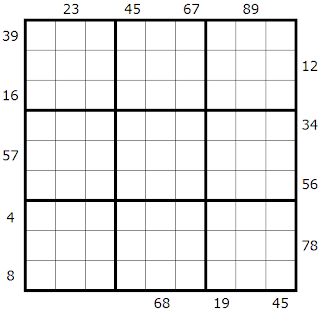