I know this round might be a bit contentious to some people. They're afraid it's going to be too puzzly and not enough Sudoku. But just because a Sudoku is named after a puzzle genre, doesn't mean it's completely like that genre. I have a few ways I can imagine these puzzles to be far more like a Sudoku than a puzzle.
I tried to design this Sudoku to not heavily rely on being familiar with Japanese Sums as a puzzle. The logic needed isn't much different than a Killer Sudoku. This is one of the ways I imagined the Sudoku element to shine much more through than the Japanese Sums element of the puzzle. The puzzle shouldn't be too hard if you work the clues in the right order. I hope this helps prepare a bit for the championship.

In this Sudoku, shade some cells in the grid so that the numbers outside the grid represent the sums of the digits in the white cells in that row or column. The sums are given in the correct order. If there are multiple sums in a row or column, they need to be separated by at least one shaded cell. Some shaded cells may be given. 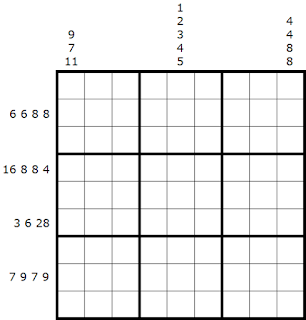