The fourth practice puzzle for the 2017 WSC.

I feel this round can use all the practice necessary. The Joker rule is something new, as far as I'm aware, and seems to be a bit tricky. Basically the Joker only follows the standard Sudoku rules, but ignores any variant in the puzzle. This is because the Joker digit can assume whatever digit it needs to be for the puzzle to work, even if it means being different digits in the same cell.
The Battenburg Sudoku was one of my own inventions. The reason I picked this type first is because it has both a positive and a negative rule in effect as all possible markings are given. The "All possible markings" rule is a bit odd with the Joker. The way I understand it, in the given solution there are no places where any extra markings HAVE TO be placed. Even if there are markings that could be placed if the Joker assumes the correct parity, they don't have to be placed as the Joker can assume an incorrect parity. I do hope my interpretation is correct, but it seems to conform with the given example in the Instruction Booklet. If it isn't, my apologies for providing an incorrect puzzle. It has happened before. It should still be fun to solve.
I think the puzzle worked out pretty well. The opening should properly show the way this variant interacts with the Joker. Once you've determined the value of the Joker, the solve really takes off. It's probably a harder puzzle because you have to keep reminding yourself of the Joker rule and thread carefully through the puzzle.

In this Sudoku, everywhere a 2x2 square forms a Checkerboard pattern of Odd and Even digits a Battenburg marking is given. All possible Battenburg markings have been given.
Additionally, one digit in the puzzle is a Joker. This Joker digit can be both Odd or Even. The same Joker cell may assume different parities for different 2x2 areas. 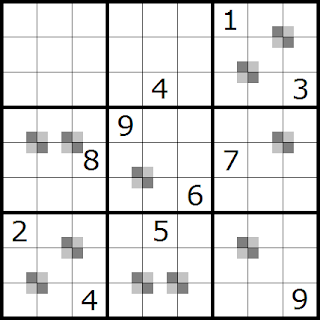