The second practice puzzle for the 2017 WSC.

This second puzzle is a type I don't necessarily remember solving before, but it's not exactly a new type. There's been numerous similar variants with products and sums, but this one only uses the number 12. It is the 12th WSC, so it isn't that surprising a twist.
It's impossible to write a puzzle without any given digits, as there is no way to differentiate between a number of digits. So I decided to find a nice layout of givens and work with that. The centred 1-9 is always a nice layout to choose and it actually led to some nice interactions with the 12-dots. So I designed the rest of the dots around that to make the puzzle unique. I think it worked out well. I can't really judge the difficulty, although it might be trickier than it felt designing as one deduction came about by accident as I missed it was forced pretty much from the start and went with it. Hope it's useful and fun to solve.

In this Sudoku there are a number of grey dots between cells. If there's a grey dot between two cells, the sum or product of the two digits in these cells must be 12. Not all possible dots have been marked. 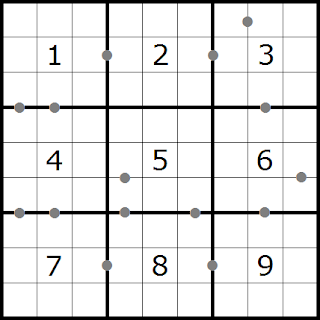