Today features the least finicky puzzles in the test. For these 4 you can pretty much expect a nice logic solve. The remaining three are variants that I haven't worked out how to construct nicely yet. Especially the Full Tapa is a problem as I can't even figure out how to solve the example in the booklet. There's a chance I will find a way to make it work for me, which isn't reflective of the actual test. Battle Tapa from TVC IX was a good example of that.

First up is the Combined Tapa. I'm not really happy with the Digital Tapa part because of the changed 0 rule, but the rest is nice in my opinion. It is 12 by 12 just like the previous time a Combined Tapa appeared on the TVC.
Secondly is the Fractional Tapa. I finally gave up on trying to incorporate the 3 by 3 fractioned cells and then the construction went far more smoothly. I put some clues inside the fractioned cells as Serkan said it could happen, so there's a good chance it will. I think it worked out well. I'm happy with the result.
Then we have the Modern Tapa. I have not a single clue why it's called Modern, but that's unimportant. I think I exploited the set layout very well and it's important not to forget the no reflections rule.
Lastly there's the Tapa Balance. I employed a small gimmick in this puzzle as I expect that Serkan might do the same thing. I would have at least if I were to make the test. So pay attention to the puzzle before you get started. I think this one is relatively tricky.

1. Combined Tapa
The grid is divided into 4 sections. Each section uses a different rule. All sections together form a single Tapa wall.


Left Top: Place Tapa
Follow regular Tapa rules. Place one of the given Tapa clues in each grey cell. Each clue is used once.


Right Top: Peers Tapa
Follow regular Tapa rules. Each clue cell has a peer, symmetrical to the center of the grid. The sums of the digits in both cells are equal, but two peers don't contain the exact same digits. Find the missing peers to solve the grid.


Left Bottom: Digital Tapa
Follow regular Tapa rules. Digits are in digital form as shown below the grid. Some segments may be missing from the original numbers. Any digits can be a 0.


Right Bottom: Ir-irregular Tapa
The grid is divided into irregular shapes. Each shape is either completely coloured or not coloured. Each cell in a shape counts as a seperate cell in the clue count.

3. Fractional Tapa
Follow regular Tapa rules. Some cells are divided into smaller squares. Numbers in the cells indicate the total area of each distinct group of painted cells, rounded to 2 decimal places. Nowhere in the grid can a vertex(corner of a square) be completely surrounded by painted squares. 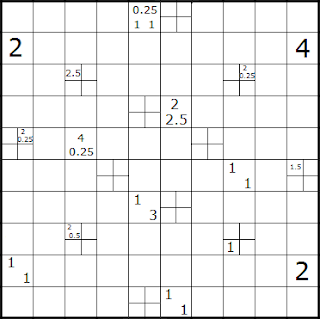 7. Modern Tapa
Follow normal Tapa clues. Additionally each clue gives the length of each distinct groups of painted cells on its neighbours as well as each group of empty ones, in an exact circular pattern (without reflections). Imaginary cells outside the grid are all considered empty.


9. Tapa Balance
Follow regular Tapa rules. Additionally the grid has to be in balance. This means the total number of black cells on either side of the pivot point is the same.