Here is the second part of practise puzzles. This set contains a Broken Tapa, Tapa Tapa and a Sweeper Tapa. I've recreated the Sweeper Tapa. This is because I agreed with the comments that it might be a bit too hard for a practise puzzle. I think this one flows a bit smoother, but still uses the same opening and a similar layout as the first puzzle.
The Broken Tapa is a challenging puzzle. But I expect the actual puzzle on the test will also be challenging. Of course I won't know for sure till I see the points table tomorrow. I still think it's a fun puzzle though.
The Sweeper Tapa should be a bit nicer than my first one. Sometimes you need that extra bit of time to make the puzzle better.
The Tapa Tapa worked out okay. It's a nice variation, except I find the 1 clue constraint around the cities a bit restricting as they block a lot of the paths for the Tapa. Remember that the numbers indicate the shortest possible routes.


5. Broken Tapa
Fit the given pieces into the grid without rotating or reflecting. The pieces may not overlap. Then solve the puzzle as a regular Tapa.

7. Sweeper Tapa
Use regular Tapa rules. After the wall is blackened no symbol may appear more than once in every row or column. 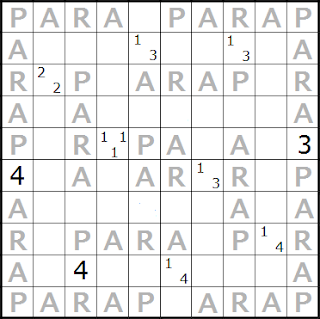 10. Tapa Tapa
Follow regular Tapa rules. Additionally each train represents a city. The shortest possible distance between certain cities are given. The shortest distance is the shortest of all routes traveling horizontally and vertically along the Tapa wall that touches 2 cities (diagonal touching is enough). Cities can have Tapa clues which only use the digit 1, appearing as many times as necessary.